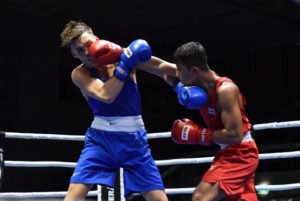 The Asian boxers have been preparing with full speed to the upcoming ASBC Asian Confederation Boxing Championships and four powerful teams from our continent are attending in the 38th edition of the Gee Bee Tournament in Helsinki which is the key event this week. In the first competition day of the event Asia’s teenagers as Thailand’s Atichai Phoemsap and Kazakhstan’s Talgat Shayken both have done strong debuts.
Following the Strandja Memorial Tournament the Gee Bee Tournament will be another small World Championships with four Confederations’ boxers in the line-ups. Australia, Canada, England, France, Lithuania, Russia, Poland, Netherlands, and United States of America are also attending for the medals in the forthcoming Gee Bee Tournament.

An Asian battle was held at the light welterweight (64kg) in Helsinki
Kazakhstan’s new light welterweight (64kg) hope Miras-Ali Sarsenov achieved bronze medal in their last National Championships and attended in the Thailand Open International Boxing Tournament last year. His opponent in the preliminary round was Kyrgyzstan’s Bek Kamchybekov who is more experienced in the international stage. The Kyrgyz southpaw landed strong uppercuts while Sarsenov tried to launch quick combinations in their narrow fight. Kamchybekov was more confident from the second round and his efforts were enough to beat his Kazakh rival in Helsinki.

Thailand’s Youth Olympic Games winner Atichai Phoemsap started his elite career with a victory in Helsinki
Thailand’s Atichai Phoemsap won the Buenos Aires Youth Olympic Games, the Budapest AIBA Youth World Boxing Championships and the Bangkok ASBC Asian Confederation Youth Boxing Championships in 2018. Phoemsap moved up to the light welterweight (64kg) and the Gee Bee Tournament is his first ever elite international competition. The 18-year-old Thai teenager started slowly against Sweden’s Emil Harrysson but he found his best tempo in the middle of his first elite bout. The final verdict was split decision to Atichai Phoemsap who started his elite career with a victory.

Kazakhstan’s first success was achieved by Talgat Shayken
Kazakhstan’s Talgat Shayken was silver medallist in the Buenos Aires 2018 Youth Olympic Games and joined to the elite age group two months ago as Thailand’s Atichai Phoemsap. The Kazakh teenager just moved up to the welterweight (69kg) but he was able to adopt the level of the category very quickly. The 19-year-old Kazakh talent had to fight against a nine-year older opponent Netherlands’ Delano James but he was able to reduce the fighting distance successfully. Shayken was stronger and landed more punches than his Dutch opponent and won his first elite international bout.