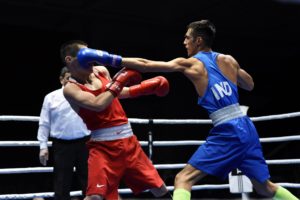 The 38th edition of the Gee Bee Tournament continued with the quarter-finals in Helsinki, Finland today where several of our future hopes shined on Day2. The prestigious competition is a preparation event for the upcoming ASBC Asian Confederation Boxing Championships. The Indian and the Kazakh boxers were amazingly successful in the second competition day and their youngsters advanced to the semi-finals.
Following the Strandja Memorial Tournament the Gee Bee Tournament will be another small World Championships with four Confederations in the line-ups. Australia, Canada, England, France, Lithuania, Russia and United States of America also will be fighting for the medals in the forthcoming Gee Bee Tournament.

India’s Muhammed Hussamuddin defeated his Russian rival and became Asia’s first medallist in the Gee Bee Tournament
India’s Muhammed Hussamuddin robbed into the world of boxing two years ago when he claimed silver medal at the Strandja Memorial Tournament. The currently 24-year-old Indian won the strong Chemistry Cup in 2018 and he was the favourite against his Russian rival Ovik Oganisian who attended in the World Series Boxing. The Indian bantamweight (56kg) boxer launched punches from every single situation and finally he deserved to win their contest by unanimous decision claiming Asia’s first guaranteed medal in Helsinki. His teammate Kavinder Singh Bisht won his bout also in this category following his aggressive style against Kyrgyzstan’s Almanbet Alibekov.

Kazakhstan’s 19-year-old Talgat Shayken advanced to the semi-finals
Kazakhstan’s Talgat Shayken developed step by step in the recent years and raised his number of international bouts well enough since 2016. He was silver medallist in the Buenos Aires 2018 Youth Olympic Games and joined to the elite age group two months ago. The Kazakh teenager just moved up to the welterweight (69kg) but he was able to adopt the level of the category very quickly. The 19-year-old Kazakh talent eliminated Netherlands’ National Champion Delano James on Day1 and he was able to control his second contest against France’s Victorien Monny. Shayken found the best attacking positions still in the first round and captured a guaranteed medal in his first elite international event.

India’s Dinesh Dagar is a semi-finalist at the welterweight (69kg)
India’s Dinesh Dagar joined to the national team one year ago and he was able to reach some surprises in his international competitions. The 23-year-old welterweight (69kg) boxer, who claimed silver medal in the 2018 Indian Open International Boxing Tournament, delivered a top sensation on Day1 when he eliminated Lithuania’s London 2012 Olympic Games bronze medallist Evaldas Petrauskas. Dinesh had a tough second opponent Finland’s Aydin Behruz who has done also a surprise in the first competition day in Helsinki. The Indian boxer worked well in the first two rounds and won their contest by split decision which means he advanced also to the semi-finals.

India’s AIBA Youth World Champion Sachin Siwach Singh eliminated a top Russian boxer at the flyweight (52kg)
India’s AIBA Youth World Champion and ASBC Asian Confederation Youth Boxing Championships silver medallist Sachin Siwach Singh turned to 19 last December and moved up to the flyweight (52kg). He is still taller than most of his opponents in this category and used his longer reach to keep the best fighting distance against Russia’s Hamburg 2017 AIBA World Boxing Championships bronze medallist Tamir Galanov. The Russian landed tough hooks but Sachin replied with left-handed jabs during their tough exchanges. The Indian boxer amazed the crowd in the third round which was enough for him to win their difficult contest in Helsinki.

Kazakhstan’s twins Nurbek and Aybek Oralbay have done successful debuts in the elite age group
Kazakhstan’s Nurbek Oralbay claimed gold medal at the Budapest 2018 AIBA Youth World Boxing Championships and the Gee Bee Tournament is his debut among the elite boxers. The Kazakh teenager used his perfect tempo to overcome his Swedish rival Anton Hellstroem at the middleweight (75kg). Oralbay moved back before his attacks and found the best attacking positions in their meeting which was a spectacular one in Helsinki. The promising Kazakh boxer, who was born in 2000, won their contest by unanimous decision and advanced to the last four in Helsinki. His twin brother Aybek Oralbay eliminated Russia’s AIBA Youth World Boxing Championships silver medallist Vladimir Uzunyan in a superb contest at the heavyweight (91kg).