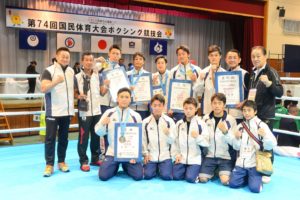 The Japanese National Sports Festival was held in the city of Ibaraki where the women’s elite, male youth and men’s elite boxers were in action to get their titles. Reito Tsutsumi and Reito Takahashi performed world class in the youth part of the National Sports Festival while Sana Kawano, Ryusei Baba, returning Yasuhiro Suzuki and Issei Aramoto were the bests in the elite competition.

The Japanese women boxers could attend only at the flyweight (51kg) but 16 male youth and elite categories were also in the program of the National Sports Festival. The team of Nara topped the team rankings achieving several gold medals, Hiroshima became the runner-up and city of Chiba got the third place.

At the lone female category Sana Kawano has got strong experiences from various events but she had to meet in the semi-finals with veteran Aya Shinmoto. The younger Kawano managed to win her bout and repeated that strong performance also in the final of the female flyweight (51kg) against two-time AIBA Women’s World Boxing Championships bronze medallist Madoka Wada.

The favourites of the smallest two youth categories as Kazuma Aratake and Kyosuke Takami both won their divisions with excellent style of boxing. Arashi Kajiwara defeated Komsomolsk-na-Amure International Youth Tournament winner Shogo Tanaka in the semi-finals of the youth flyweight (52kg) and continued his winning path against Keita Nakayama taking the gold medal of the category.

Reito Tsutsumi claimed gold medal at the Puerto Princesa 2017 ASBC Asian Junior Boxing Championships and dominated also the tough Bornemissza Youth Memorial Tournament in Eger, Hungary this June. The 17-year-old super talented boxer dominated the final of the lightweight (60kg) against Shinri Miyahara and proved that he is a gold medal contender also in the upcoming Ulaanbaatar event.

Reito Takahashi could be Japan’s another highlight in the forthcoming ASBC Asian Youth Boxing Championships in Ulaanbaatar who defeated his main national rival already in the quarter-finals. His success over 2017 ASBC Asian Junior Champion Sora Tanaka in the last eight guaranteed for his final success at the youth light welterweight (64kg) where his last rival was another international level boxer, Kenshin Yura.

The youth welterweight (69kg) gold medal was taken by 17-year-old Jojiro Kuroda who defeated Ryang Chang Te in the final but he did not get the green light to attend in Ulaanbaatar. Rei Nakano dominated all of his previous youth competitions as the middleweight (75kg) but he suffered a loss to Kota Matsuno in the National Sports Festival.

In the elite part of the Japanese National Sports Festival, Ryusei Matsumoto won the first title following his success over Reiji Kawaguchi in the final of the light flyweight (49kg). Ryusei Baba joined to the national team in 2017 and he had enough experiences to win the elite flyweight (52kg) in Ibaraki.

Asian Games Test Event silver medallist Rentaro Kimura is also an experienced boxer in the international stage who won the gold medal of the elite bantamweight (56kg) following his strong success over Riku Masuda. Hiroki Ogawa is not the well-known name in Japan’s boxing life but his skills were enough to beat 19-year-old Kazuki Anaguchi in the final of the lightweight (60kg).

ASBC Asian Junior Boxing Championships silver medallist Taiga Imanaga is only 20 but he claimed the title of the light welterweight (64kg) which is his first elite national gold medal in Japan. Yasuhiro Suzuki was Olympian in London seven years ago and following a few years of break he returned with a gold medal at the welterweight (69kg) beating Masayuki Urashima in the final of the National Sports Festival.

ASBC Asian Youth Boxing Championships bronze medallist Issei Aramoto will be turning to 20 in the upcoming weeks who moved up to the middleweight (75kg) in the recent months. Aramoto landed powerful combinations in the final and defeated Rento Tanaka claiming his next national gold medal. In the last final of the whole National Sports Festival, Ryudai Onikura defeated the favourite, experienced Ren Umemura unanimously.

List of the winners in the Japanese National Sports Festival