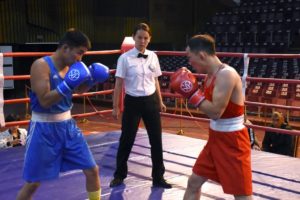 The Kyrgyz National Boxing Championships was held for their elite male boxers in the capital city of the country in Bishkek. Kyrgyzstan’s medallists from the last edition of the ASBC Asian Elite Boxing Championships as Mirlan Turkbay Uulu and Erkin Adylbek Uulu both won the gold medals in Bishkek where the event delivered some unexpected surprises.

Eight weight classes have been involved to the competition from the flyweight (52kg) up to the super heavyweight (+91kg) which divisions will be official ones also in the upcoming Asian & Oceanian Olympic Qualification Event. The Kyrgyz National Boxing Championships was also a selection event for February’s Qualifiers and further top international competitions.

Kyrgyzstan’s highest ranked boxer, ASBC Asian Champion Azat Usenaliev missed the National Championships but many experienced boxers fought for the title of the flyweight (52kg) in Bishkek. ASBC Asian Boxing Championships bronze medallist Mirlan Turkbay Uulu became the winner of the division walking over to the gold following Nurzhigit Dyushebayev was unable to box against him.

Akylbek Esenbek Uulu was the main sensation of the Kyrgyz National Championships who won the title of the bantamweight (57kg) at the very first time and awarded also the Best Boxer Trophy. The 21-year-old Bishkek-based boxer eliminated former WSB hope Mirbek Sherov in the semi-finals and he was slightly better than Munarbek Seyitbek Uulu in the title bout of the category.

Fourteen boxers attended at the lightweight (63kg) in the Kyrgyz National Championships in Bishkek where the category had high quality as well. Argen Kadyrbek Uulu was quarter-finalist in the Jakarta 2018 Asian Games and won high number of tough fights in the recent two years. The 23-year-old boxer had a super talented teenage rival Ryspek Bektenov in the final of the national event and due his impressive last round Kadyrbek Uulu got the gold.

ASBC Asian Boxing Championships bronze medallist Nurlan Kobashev of Chui region was the main favourite for the gold of the welterweight (69kg) but he suffered an unexpected loss to Nursultan Mamataly Uulu of Dzhalal-Abad region in the semi-finals. The young talent reached strong youth results during his career but his successes over more experienced rivals including Daniyar Damirdin Uulu of Bishkek in the final, were big surprises in the National Championships.

Omurbek Bekzhigit Uulu began boxing only in 2015 at the age of 15 but the teenager impressed in the Bangkok ASBC Asian Elite Boxing Championships and also in the Yekaterinburg AIBA World Boxing Championships. The 19-year-old Bishkek-based boxer used his strength to stop all of his opponents in the National Championships and worked enough to beat also Zharkyn Turatov in the final of the middleweight (75kg).

Bishkek’s Erkin Adylbek Uulu was Team Kyrgyzstan’s flag bearer in the Opening Ceremony of the Rio 2016 Olympic Games and the tall light heavyweight (81kg) boxer is still strongly motivated. The 28-year-old athlete claimed bronze at the Bangkok ASBC Asian Elite Boxing Championships this April and continued his impressive winning path in the Nationals beating Taalaybek Aitbek Uulu in the finals.

Bishkek’s Rustam Yrysbek Uulu was not the main favourite for the gold at the heavyweight (91kg) but he defeated all of his rivals including Bektur Alymbek Uulu in the finals while ASBC Asian Boxing Championships bronze medallist veteran Sergei Parenko earned only bronze this time. The super heavyweight (+91kg) gold was captured by Shermukhammad Khakimov who had a tough final against Daniyar Akunov.

List of the women’s winners in the Kyrgyz National Championships