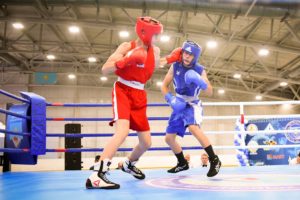 Altogether 93 youth male boxers attended in the Alimzhanov Youth Memorial Tournament in Dzhalal-Abad and 10 champions have been crowned. Boxers who were born in 2002 and in 2003 were eligible to compete in the Alimzhanov Youth Memorial Tournament. This age group is the youth for 2020 to manage the new generation for the next year and give them chance to increase their international experiences.

The Alimzhanov Youth Memorial Tournament has been holding by the local organizers every year in the period of Autumn. The first title of the competition was won by Nuriddin Abdugaffarov of Uzbekistan who won three contests in Dzhalal-Abad but his most difficult one was the final against Kyrgyzstan’s Omorali Mamatkulov. The 16-year-old Uzbek was slightly better in all aspects of boxing and defeated the Osh-based boxer in the final of the light flyweight (49kg).

The first Kyrgyz gold medal was achieved by Erzat Tashtanbekov who is a local hope from the city of Dzhalal-Abad. The flyweight (52kg) boxer had four tough fights but gave in everything to beat the top rivals as Islam Torobayev of Kyrgyzstan and Galym Almakhan of Kazakhstan and defended his 2018 throne. The second Kyrgyz gold medal arrived quickly in the third final which was won by Zhangoro Tashiyev against Asadbek Kasymov of Osh region at the bantamweight (56kg).

Kyrgyzstan’s Bishkek-based Askat Kultayev claimed silver medal in the 2018 Junior National Championships and he had enough international experiences to beat Kazakhstan’s Ali Absattar in the final of the lightweight (60kg). Eldar Turdubayev is a local favourite as Tashtanbekov who increased the host city’s success after beating Uzbekistan’s Mukhammed Abdusalamov in the final of the light welterweight (64kg).

Uzbekistan’s Mukhammad Abduvakhobov was among the favourites of the title at the welterweight (69kg) and walked over to the gold after his top Kyrgyz rival, Junior National Champion Baygazy Malik Uulu was not able to box in the final. The Kyrgyz boxer, who was titleholder in the Alimzhanov Youth Tournament, impressed during his road to the finals and proved his amazing talent.

Islam Turgunov is part of the Kyrgyz youth national team which will be attending in the upcoming ASBC Asian Youth Boxing Championships in Ulaanbaatar. The 2018 Junior National Champion is an excellent future hope who stopped all of his rivals in the Alimzhanov Youth Memorial Tournament including Ali Nuriyev of Karakol in the final of the middleweight (75kg).

Uzbekistan’s Islom Gulomov is famous of its strength and defeated all of his opponents in Dzhalal-Abad by RSC achieving the title of the light heavyweight (81kg). The ninth gold medal was taken by Erlan Kadyrbayev of Kyrgyzstan who spent a short time in the ring when he stopped a local boxer Fayzullakh Takhirzhanov. Kazakhstan’s lone gold was taken by Dosbol Asubay at the super heavyweight (+91kg) after beating his teammate Aron Anuarbek which was the last final in Dzhalal-Abad.

List of the winners in the Alimzhanov Youth Memorial Tournament