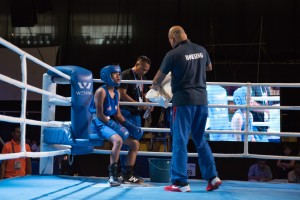 Pinweight (46kg):
Philippines’ newcomer in the junior national team Kenneth De La Pena delivered sensational performance in the quarter-final of the ASBC Asian Confederation Junior Boxing Championships where he eliminated previously unbeaten Selay Soy of India. Following their unique contest De La Pena had to meet with Chinese Taipei’s Yu Chen Cheng and tried to keep the focus well enough in the bout. Yu had only three losses during his whole career but he was not able to follow De La Pena’s speed in their contest this time. The referee counted Yu in the third round after a lethal punch therefore the Filipino boxer can prepares to his final against Kazakhstan’s Akilbek Mukhtarov who eliminated Uzbekistan’s Mukhammadmuso Abdurakhmanov in another spectacular contest.

Flyweight (50kg):
Philippines’ John Vincent Pangga claimed several national titles during his career and he had already 87 bouts since 2011. The 15-year-old Filipino talent, who is spending his first year in the junior age group, eliminated Uzbekistan’s Heydar Aliyev Junior Cup winner Amirbek Ibodullayev and United Arab Emirates’ Saif Al-Kharoosi during his road to the semi-finals. The 15-year-old talent opened his semi-final with strong performance against Kazakhstan’s Junior National Champion Talgat Syrymbetov. The referee counted the Kazakh boxer once in the first round and Pangga was able to continue his tough performance in the second round. Syrymbetov did a fantastic final round but his efforts were not enough to turn back their contest in the event. Pangga’s gold medal opponent will be Thailand’s Sarawut Sukthet who was too smart for Kyrgyzstan’s Muktarbek Ibraimov.

Light bantamweight (52kg):
Uzbekistan’s Asadkhudja Muydinkhodjayev is one of the most experienced junior athlete in the entire Asian continent who eliminated Japan’s Hiromi Gomi and Iraq’s Children of Asia Games competitor Hussein Abdulhadi Al-Baidhani in the road to the semi-finals. The Uzbek southpaw did his very best against Thailand’s Nodpharat Thakhui who had the brave attempt to beat his tough opponent in the semi-finals. Muydinkhodjayev delivered superb third round and his enthusiasm delivered for him a place in the final where he will be boxing with Kazakhstan’s Biybars Zheksen who eliminated India’s Bhavesh Kattimani.

Bantamweight (54kg):
Uzbekistan’s Rakhmatullo Toshpulatov was silver medallist in their Junior National Championships but he received the right to compete in the ASBC Asian Confederation Junior Boxing Championships. The Uzbek boxer used his height advantage against South Korea’s Han Sang Beom in the first preliminary round and he did the same against Bhutan’s Rada Wangchuk in the quarter-final. The Uzbek boxer was effective also against Iran’s Hossein Hajiagha Barari in the semi-final and his longer reach was the difference between them. Toshpulatov advanced to the gold medal bout where his next opponent will be Kazakhstan’s Aitzhan Ashirkhan who eliminated Japan’s Kenshin Yura in the semi-final.

Featherweight (57kg):
Uzbekistan’s Javlonbek Yuldashev was member of their junior national team already in 2016 and since then he moved up three weight classes. The 16-year-old Uzbek claimed silver medal in the Heydar Aliyev Junior Cup in Azerbaijan and eliminated already Iran’s Farhad Moradi and Japan’s Kenshin Yamamura. He tried to overcome in the attacks India’s Ankit Narwal who is spending his first year in the junior age group. The Uzbek talent launched single jabs and sometimes he combined them with hooks which worked well in the whole bout. Yuldashev’s next opponent will be South Korea’s Goh Seung Hun whose counter-attacks were successful against Kyrgyzstan’s Aidar Oroskulov.

Lightweight (60kg):
India’s Akshay Kumar won four national events during his career and due his strong family connections to boxing, he was well prepared to the competition. The Indian southpaw eliminated Thailand’s Sumatas Ontong in the first preliminary round and Chinese Taipei’s experienced Lin Yu in the quarter-final. The Indian boxer had a few difficulties in the first round against Japan’s Reito Tsutsumi who eliminated Kyrgyzstan’s Nuradin Rustambek Uulu in the quarter-final. The Japanese boxer, who will be turning to 15 soon, had successful attacks against the Indian and his hooks delivered for him a place in the final. Tsutsumi’s next opponent will be Kazakhstan’s Bekzat Yerimbet who defeated Uzbekistan’s Sherzod Kodirbayev in a one-sided semi-final.

Light welterweight (63kg):
Uzbekistan’s Nurislom Ismoilov added to their junior national squad just before the start of the ASBC Asian Confederation Junior Boxing Championships. The Uzbek talent proved he is a top talent, eliminated India’s Vijay Deep in the quarter-final and started strongly against South Korea’s Lee Chae Hyun who achieved silver medal in their Youth National Championships. Ismoilov dominated the first round which determined their contest until the end of the final bell. Following his sensational performance Ismoilov will be facing for the title with Kyrgyzstan’s Umar Kubanychbek Uulu who proved his technician style against Thailand’s Weerapon Jongjoho.

Welterweight (66kg):
Japan’s Sora Tanaka amazed the crowd when he eliminated Chinese Taipei’s Hung Sheng Po in the first preliminary round of the ASBC Asian Confederation Junior Boxing Championships and Kazakhstan’s Salimzhan Salimgereyev in the quarterfinal of the welterweight (66kg). The Japanese talent moved forward continuously and proved he is one of the best junior boxer from his country against South Korea’s Cho Hyeon Jun in the semi-final as well. Tanaka knocked down his Korean opponent and the referee stopped their semi-final in the second round which meant the Japanese boxer will be meeting for the title with Uzbekistan’s Asadbek Jumaniyazov who eliminated Kyrgyzstan’s Dastan Onolbekov.

Light middleweight (70kg):
Kazakhstan’s super talented Yerassyl Zhakpekov eliminated Uzbekistan’s Khayotbek Bakhtiyorov in the previous round which was an early final in Puerto Princesa. The Kazakh Junior National Champion, whose elder brother is member of their youth national team, started strongly against Japan’s Rei Nakano and dominated the opening minute. The Kyrgyz referee counted the Japanese boxer in the first round and after that tough punch Zhakpekov launched a lethal one therefore he won his semi-final by RSC. Zhakpekov will now meet for the title with Iraq’s Children of Asia Games silver medallist Sajjad Ali Saleh Saleem who defeated India’s Aman Ajmer.

Middleweight (75kg):
South Korea’s Kwak Min Hyuk is a very talented junior boxer who eliminated China’s Wang Liang in the quarter-final. The Korean boxer had to meet in the semi-final with Chinese Taipei’s Huang Wei Hsiang who eliminated surprisingly Kyrgyzstan’s experienced Kerimbay Erkinov in the last round. The Korean boxer was confident in the first two rounds and in spite of Huang’s efforts in the final two minutes Kwak was able to join to the gold medal bout where his next opponent will be Kazakhstan’s Kuandyk Maksut who was too strong for India’s Vinit Dahiya.

Light heavyweight (80kg):
Kazakhstan’s Heydar Aliyev Junior Cup winner Sagyndyk Togambay eliminated Iran’s Armin Azari Praivatlou in the quarter-final stage of the event. The 16-year-old experienced Kazakh boxer, who trains in Astana, dominated already the first seconds against United Arab Emirates’ Nawaf Al-Riyami. Following Togambay’s serious body launch the referee counted the UAE boxer and ended the bout before the end of the first round. Togambay was in different level than his opponent and will be boxing with India’s Mohit for the title. The Indian boxer triumphed over Uzbekistan’s Kamronbek Rakhmonov in a spectacular contest.

Heavyweight (+80kg):
India’s Satender Singh won their Junior National Championships two weeks ago and after that event he could join to compete in his first ever international tournament. The Indian boxer eliminated Chinese Taipei’s Lin Sheng Hao and South Korea’s Kim Hyun Woo in the road to the semi-finals. Singh surprise Kazakhstan’s favourite Arnur Akhmetzhanov in the first round of their semi-finals and following his tough hook the referee counted his opponent. The Indian talent continued his strong performance until the end of the final gong and advanced to the gold medal bout in Puerto Princesa. Singh will be boxing for the title with Uzbekistan’s Heydar Aliyev Junior Cup winner Shokhrukh Almatov who eliminated Kyrgyzstan’s Margilan International Junior Tournament winner Akhmed Usupov.