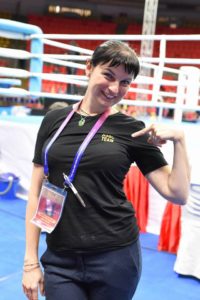 Mrs. Margit Kincses of Hungary was officially appointed as Photographer of the Asian Boxing Confederation (ASBC) today. Her new position stated in the official ASBC letter which was approved by AIBA Vice-President and ASBC President Mr. Anas Alotaiba of United Arab Emirates.
The AIBA Congress was taking place in the Russian capital in Moscow one and half month ago where the affiliated National Federations elected the leaders of the boxing world and Asia. The newly elected President of the Asian Boxing Confederation is Mr. Anas Alotaiba of United Arab Emirates and he appointed Mrs. Margit Kincses as ASBC Photographer today.
Mrs. Margit Kincses was born in her maiden name as Margit Nagy in the city of Hajduboszormeny, Hungary on November 26 in 1983. She studied nearly 20 years during her life mainly in various art schools in her home city in Hajduboszormeny, in Debrecen and also in the Hungarian capital in Budapest.
Mrs. Margit Kincses started her working career in Hungary as designer, decoration maker, photographer and she raised her experiences and language skills in New Zealand. Mrs. Kincses, who married to AIBA and ASBC staff member Mr. Tibor Kincses in 2011, worked in several arts, design, graphic design, web design and photography areas in the recent fifteen years.
She has done several professional courses and workshops in photography and also in almost all aspects of sports. She covered plenty of areas of photography since 2005 and arranged courses for beginners as instructor. Mrs. Kincses is a boxing enthusiasm, she trains three-times a week in the gym and our beloved sport is her life.
Mrs. Kincses joined to the world of boxing in 2011 as a photographer and worked in various international competitions in Kazakhstan, in Thailand, in Vietnam, in Russia, in the Philippines, in Indonesia, in Lithuania, in Azerbaijan, in Sweden, in Hungary, in Spain and many other countries to support AIBA, ASBC and the National Federations.
Mrs. Kincses’ experiences in the boxing world, AIBA and ASBC, furthermore her excellent working attitude, smiling personality and professional background in all parts of the photography and graphic design sectors will be strengthening the Asian Boxing Confederation and her work could be the way of success for Asia’s boxing life in the forthcoming years.