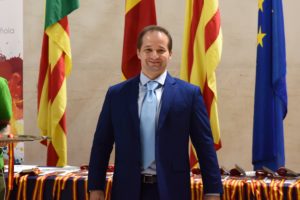 Mr. Tibor Kincses of Hungary was officially appointed as PR & Communication Director of the Asian Boxing Confederation (ASBC) today. His position, which is continuous, stated in the official ASBC letter which was approved by AIBA Vice-President and ASBC President Mr. Anas Alotaiba of United Arab Emirates.
The AIBA Congress was taking place in the Russian capital in Moscow one and half month ago where the affiliated National Federations elected the leaders of the boxing world and Asia. The newly elected President of the Asian Boxing Confederation is Mr. Anas Alotaiba of United Arab Emirates and he asked Mr. Tibor Kincses to continue his job and appointed as ASBC PR & Communication Director today.
Mr. Tibor Kincses was born in a small town in Gyula, in the Eastern part of Hungary near to the Romanian boarder on July 2 in 1979. He has been following all sport events including boxing since his early childhood from the age of 4 and built up a seriously strong database in our beloved combat sport as a teenager.
He started his university campaigns in the Szeged Science University where he finished his studies as Geographian and Historian. Following his working experiences in New Zealand Mr. Kincses finished his studies in various sports and specific areas in different universities in Budapest: sport management, boxing coach and PR & Communication Manager. He finalized his master level of PR & Communication Management studies at the Budapest Metropolitan University in 2016.
Mr. Tibor Kincses started his working career in the Hungarian Boxing Association in 2003 He supported AIBA’s communication in the Beijing 2008 Olympic Games and some other events in the end of the last decade. Following that he joined officially to the AIBA PR & Communication Team as freelance contributor and consultant in 2009 during the Milan AIBA World Boxing Championships.
Mr. Tibor Kincses attended in various boxing events and covered all level of international competitions since 2009. He joined to the staff of the Asian Boxing Confederation as PR & Communication Manager in 2012. Mr. Kincses worked in all of the recent ASBC Championships since 2013, supported each Asian National Federations therefore the new ASBC President Mr. Anas Alotaiba asked him to continue his job for Asia’s boxing life.
Mr. Kincses’ 15 years of experiences in the boxing world, AIBA and ASBC, furthermore his impressive working attitude, 24 hours of daily communication services and his professional background in all parts of boxing will be strengthening the Asian Boxing Confederation and his continuous work could be the way of success for Asia’s boxing life in the forthcoming years.