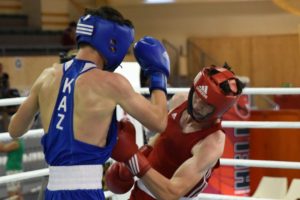 The 24th edition of the Brandenburg Youth Cup started in the city of Frankfurt an der Oder in Germany where Kazakhstan’s and Kyrgyzstan’s bests are shined in the opening day. Kazakhstan’s Aitzhan Ashirkhan knocked out his strong Lithuanian rival in his debuting contest and proved his fantastic skills.
The Brandenburg Youth Cup is a traditionally strong youth event in the whole world where the Asian boxers claimed plenty of medals and titles in the recent two and half decades. Russia, Ukraine, France, Germany, Denmark, Romania, Poland, Wales and many other top European nations are attending in the event but Argentina also sent talents to the event which is a highlight this week.
Kazakhstan’s ASBC Asian Junior Champion Biybars Zheksen claimed already medals in the big youth events last year and in 2019 he is one of the most experienced bantamweight (56kg) boxers in the whole world. The Kazakh talent claimed only bronze medal in the Bornemissza Memorial Tournament last month therefore he was motivated against France’s George Melkumian which bout he won unanimously.
Kazakhstan’s another boxer, who claimed gold medal in the Puerto Princesa 2017 ASBC Asian Confederation Junior Boxing Championships, Aitzhan Ashirkhan did not fight until the end of the last gong in his opening lightweight (60kg) contest. The 18-year-old Kazakh boxer had to meet with a good European rival, Lithuania’s Nedas Gudomskas but his strength was the difference between them on Day1 which bout was a KO success for Ashirkhan.
Kyrgyzstan’s Muktarbek Ibraimov attended in the Puerto Princesa 2017 ASBC Asian Confederation Junior Boxing Championships and claimed national titles in the recent years. The Kyrgyz lightweight (60kg) boxer had also a competitive European rival, Czech Republic’s Armenian-descent Narek Sachbazjan but he used the best tactic and strong attacks to eliminate his opponent on Day1.
Kazakhstan’s Darkhan Duisebay was involved to their youth national team this year and started with a strong success against Ukraine’s Maksim Zhyharov at the light welterweight (64kg). Kazakhstan’s ASBC Asian Junior Champion and Children of Asia Games winner Yerassyl Zhakpekov will be turning to 17 only later this year but his skills were too much for Poland’s Wojciech Guzniczak in their middleweight (75kg) meeting.