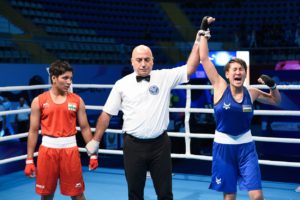 The historical 13 women finals were held in the seventh competition day at the ASBC Asian Confederation Junior Boxing Championships in Fujairah, United Arab Emirates today. The competition was held at the very first time for the women boxers in this age group which is a new milestone for Asia’s boxing life.

The very first title of the female part of the ASBC Asian Junior Boxing Championships was taken by India’s Kalpana while the Best Woman Boxer Award was going to Uzbekistan’s Sabina Bobokulova. India and Uzbekistan both achieved four titles, Kazakhstan three gold medals while Mongolia and China also earned one top position.

India’s Kalpana is the first ever ASBC Asian Women’s Junior Champion
India’s new national team member Kalpana began her boxing career three years ago but she became their Junior National Champion a few months ago. Amanpreet Kaur’s pupil trains in the city of Ambala and worked hard in the gym to be the best in her weight class. The 16-year-old pinweight (46kg) boxer eliminated Chinese Taipei’s Liu Chien Ling in the semi-finals and she was picked as the winner of the final against Thailand’s Youth National Games winner Thipsatcha Yodwaree.

Uzbekistan’s first female gold medal was achieved by Sabina Bobokulova
Uzbekistan’s Sabina Bobokulova won three international tournaments in the recent one year and defeated top Russian and Kazakh boxers on these occasions. The 16-year-old top Uzbek female junior boxer had a strong final strategy against India’s Tamanna in their gold medal contest. The best Uzbek junior was a hard target for the Indian in the first round who moved more on feet than Tamanna. Bobokulova was technically better than her attacking Indian rival and controlled all of their exchanges to win her title in Fujairah.

Uzbekistan’s female development was proved by Feruza Kazakova
China’s Junior National Games winner Deng Lanping had a tough rival in the semi-finals of the women’s flyweight (50kg) in Fujairah but she could win against India’s Rinku. The 16-year-old Chinese was not able to repeat her semi-final performance in the title bout against Uzbekistan’s Feruza Kazakova. Kazakova impressed in the first round and she boxed over her previous level in the final and caught the Chinese boxer with tough punches. Kazakova landed nice left-handed hooks in their final and deserved to win the title of the flyweight (50kg) which was a surprise in the seventh competition day.

Uzbekistan’s third-in-a-row female title was taken by Nigina Uktamova
Following Uzbekistan’s two strong female successes their third finalist was experienced Nigina Uktamova who eliminated Thailand’s 15-year-old Lalita Chainarong in the semi-final of the light bantamweight (52kg). The Uzbek boxer moved ahead from the first seconds against India’s Tannu and reduced the fighting distance successfully in their contest. The Indian had longer hands but she was not able to use them effectively due the speed of the Uzbek youngster. Uktamova was still fresh and energetic in the final round which decided their battle and it was produced Uzbekistan’s third-in-a-row success.

Kazakhstan’s Nazerke Serik has done strong finish in the final of the bantamweight (54kg)
Kazakhstan’s Nazerke Serik arrived from a boxing family and following the successes of the boys, she tried to get her nation’s first female title in Fujairah. The 16-year-old Kazakh attended several international events as her bantamweight (54kg) final opponent India’s Neha. Serik started better their bout and landed punches from closer distance but the Indian received good advices in the first break. The Kazakh talent mobilized her remaining power well in the third round and won the Asian title of the category.

Mongolia’s Nomin-Erdene Tugsjargal became the surprise of the featherweight (57kg)
China’s Liang Xinyu won their Junior National Games this April which was their main selection tournament for the ASBC Asian Junior Boxing Championships. The 16-year-old Chinese has got already more than four years of experiences in our sport and she was the favourite against Mongolia’s lobe finalist Nomin-Erdene Tugsjargal. The Mongolian boxer was highly motivated in their final and caught her Chinese opponent with nice jabs in the opening round. Liang worked better in the second round and returned to the match with more aggressive style. The Mongolian felt this is the best chance of her whole career and her great finish delivered for Tugsjargal a gold medal.

India’s Preeti Dahiya turned back the final of the women’s lightweight (60kg)
India’s Preeti Dahiya impressed in the preparation events of the ASBC Asian Junior Boxing Championships and eliminated already her main rival in the semi-final of the lightweight (60kg). The Indian had to face in the final with Uzbekistan’s Mokhira Akhmedova who made a big surprise in the semi-finals when she eliminated Kazakhstan’s Nazym Abdikhan. The Indian was nervous in the first round and the Uzbek looked more concentrated in the opening period of their final. Dahiya stepped into the gas in the second round in time and turned back their final contest in Fujairah claiming India’s second female gold.

Uzbekistan’s next surprise was delivered by Aziza Zokirova
India’s Khushi claimed the gold medal in their Junior National Championships earlier this year and advanced to the final of the light welterweight (63kg) in Fujairah. The Indian teenager was the favourite for the gold when she faced with Uzbekistan’s Aziza Zokirova in the next final of the competition. The Uzbek, who eliminated a local boxer in the semi-finals, looked fresh in the first round and landed tough punches from closer distance. The Indian tried to use her longer hands in the final but Zokirova was the better boxer today and achieved Uzbekistan’s fourth title in the female part of the championship.

China’s new female hero is Liu Yuhang who claimed gold at the welterweight (66kg)
China’s Junior National Games winner Liu Yuhang knocked out Uzbekistan’s Anorakhon Melieva in the quarter-finals on Day5. The Chinese welterweight (66kg) boxer had a stronger opponent in the day of the semi-finals but she defeated Kazakhstan’s Zhibek Zharaskyzy. Liu started boxing four years ago and the southpaw hope impressed in her third bout against Chinese Taipei’s Chang Chia Hsun once again. The 16-year-old Chinese boxer was patient in their final and waited for the best attacking angles to score her quick punches. Liu Yuhang worked well through all of the three rounds and deserved to win the title of the welterweight (66kg).