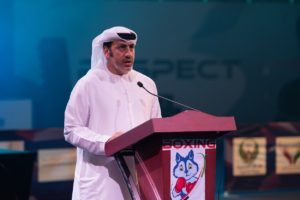 ASBC President and AIBA Vice-President Mr. Anas Alotaiba followed the finals of the ASBC Asian Confederation Junior Boxing Championships in Fujairah, United Arab Emirates which was a historical event for the girls. The management of the Asian Boxing Confederation worked hard for the success of the championship but we asked the President about his impressions and opinions.

“I am satisfied with this ASBC Asian Junior Boxing Championships where one of our main programs the Gender Equality realized. As we promised for the whole Asian boxing community, we will launch new events and more opportunities for the boxers in each age group. We had 239 boxers including 69 women here in this event which was a record breaking tournament in several aspects.

The new edition of the ASBC Asian Junior Boxing Championships was a friendly event, it was not only fun for the young boxers but all participants in Fujairah. I recognized hard job from the LOC of the competition and we received positive feedbacks from the key officials during the sessions.

The level of the boxers was very high here in this ASBC Asian Junior Boxing Championships. Uzbekistan, Kazakhstan, China and India are the best nations in our continent but many others are joined to them. Personally I think we have stronger background than ever and we are going to the right direction.

Japan will be the host of the next Olympic Games in 2020 and their current juniors are impressed me in Fujairah. Japan’s 48kg boxer Yuga Ozaki defeated one of the strongest Uzbeks in the semi-finals while their 50kg talent Daiya Kira became the Best Male Boxer of the ASBC Asian Junior Boxing Championships.

Our next project is the ASBC Asian Youth Boxing Championships which will be held in Ulaanbaatar, Mongolia next month and I am expecting hard battles on this event. Some of these strong youth hopes could be participated already in the Olympic Qualification Events in 2020.

Our very new project the ASBC Asian Grand Slam will be closing the boxing year for us in China which event is scheduled to take place in December and we are in negotiation with the LOC to fix all details in the upcoming day. We have also many projects and goals for 2020 which will be important for our continent’s boxers,” said ASBC President Mr. Anas Alotaiba in the venue of the successful ASBC Asian Junior Boxing Championships.