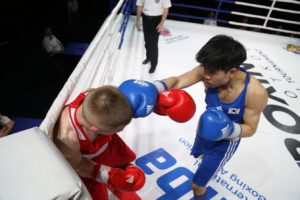 Altogether 32 bouts were held in the second competition day of the Korotkov Memorial Tournament in Khabarovsk which is located in the Russian Far East. The Japanese boxers proved top performance on Day2 and all of their hopes won their contests including AIBA Youth World Champion and two-time ASBC Asian Youth Champion Hayato Tsutsumi.
The competition was named by the hero of the Soviet Union Mr. Korotkov and the competition began on the Victory Day in Khabarovsk. Besides to the Russian teams, many European and Asian squads decided to attend in the strong Korotkov Memorial Tournament including Uzbekistan, Japan, Kyrgyzstan, Tajikistan, China, DPR Korea and Mongolia.

AIBA Youth World Champion Hayato Tsutsumi’s superb comeback in Japan’s big day
Hayato Tsutsumi was gold medallist in the St. Petersburg 2016 AIBA Youth World Boxing Championships and he claimed two titles in the 2016 and in the 2017 editions of the ASBC Asian Confederation Youth Boxing Championships. He acclimatized in the elite competitions in 2018, attended at the Jakarta Asian Games as well but suffered a serious injury in their last Japanese Elite National Championships. Tsutsumi recovered successfully and opened his campaign against Belarus’ Mikalai Shah with an easy success returning to the boxing world in good shape. His teammate Yuta Akiyama defeated Tajikistan’s Russian-based Shokhmukhammad Azizov and Hiroaki Kinjo was also too strong for Egypt’s Omar Elsayed Ragab at the welterweight (69kg) making Day2 perfect for Japan.

Uzbekistan’s Bilolbek Mirzarakhimov also proved he is a star in the new generation
Uzbekistan’s Bilolbek Mirzarakhimov was silver medallist in the St. Petersburg 2016 AIBA Youth World Boxing Championships and he is also ASBC Asian Youth Champion as Hayato Tsutsumi of Japan. The 20-year-old Uzbek moved up to the welterweight (69kg) and he proved that his excellent footwork is strong enough to beat top elite opponents. Mirzarakhimov was quicker than Russia’s Taron Pogosyan and landed several effective counter-punches which meant he can continue his campaign in Khabarovsk.

Kyrgyzstan’s teenage talent Omurbek Bekzhigit Uulu impressed once again and delivered the main surprise of Day2
A new flag bearer at the middleweight (75kg), Omurbek Bekzhigit Uulu is a native talent in our sport who began boxing only in 2015 at the age of 15 but after four years of experiences, he reached the level of the elite national team in the Kyrgyz Republic. As first their teenage talent eliminated Mongolia’s Davaanyam Davaasuren who was also quarter-finalist in the ASBC Asian Confederation Boxing Championships as Bekzhigit Uulu. The Kyrgyz boxer had a stronger rival as second in Khabarovsk as he had to meet with Russia’s AIBA Youth World Boxing Championships silver medallist Daniil Teterev on Day2. Both boxers were born in 2000 and joined to the elites only a few months ago but their battle was surprisingly won by the promising Kyrgyz hope.

Strong Uzbek start at the super heavyweight (+91kg) in Khabarovsk
Uzbekistan’s Ulugbek Mubinov was silver medallist in the Subic Bay 2013 ASBC Asian Confederation Youth Boxing Championships and since then he captured one of his main goals the Uzbek Elite National title as well. Mubinov was quicker than Belarus’ Dzmitry Doronin and eliminated his European opponent winning the bout by unanimous decision. His younger teammate ASBC Asian Youth Champion Lazizbek Mullajanov spent less than one round in the ring when Russia’s Vyacheslav Ryabov abandoned their fight.

Teenagers as Irie, Michidmaa and Bekzhigit Uulu shined in the opening day of the Korotkov Memorial Tournament