Teenagers as Irie, Michidmaa and Bekzhigit Uulu shined in the opening day of the Korotkov Memorial Tournament 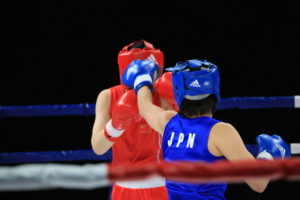 The first competition day of the Korotkov Memorial Tournament saw 22 preliminary contests in Khabarovsk which is located in the Russian Far East. Japan’s Sena Irie and Mongolia’s Erdenedalai Michidmaa are super talented young female talents who won their opening contests in the Korotkov Memorial Tournament against Chinese opponents.
The competition was named by the hero of the Soviet Union Mr. Korotkov and the competition began on the Victory Day in Khabarovsk. Besides to the Russian teams, many European and Asian squads decided to attend in the strong Korotkov Memorial Tournament including Uzbekistan, Japan, Kyrgyzstan, China, DPR Korea and Mongolia.
Japan’s two-time AIBA Women’s Youth World Boxing Championships bronze medallist Sena Irie joined to the elite age group this January and her skills were enough to beat China’s Chan Shaodi in the first round of the female featherweight (57kg). Another Asian teenage hope Mongolia’s Erdenedalai Michidmaa was too strong for China’s Qin Simin and also started her campaign with a success.
Japan’s Olympic Test Event winner Ryomei Tanaka is member of the national team since 2014 and his technical skills were enough to eliminate Azerbaijan’s former Youth Olympic Games winner Salman Alizada in a tough bout at the men’s flyweight (52kg). DPR Korea’s Kim Jang Ryong is a powerful boxer in this weight class who had good international results in the recent two years therefore his success over Russia’s Evgeniy Osintsev was not a surprise in Khabarovsk.
Two big names had to box already in the first preliminary round of the men’s flyweight (52kg) in Khabarovsk: Uzbekistan’s Abrorjon Kodirov and China’s Asian Games bronze medallist Wu Zhonglin. The Uzbek boxer used his world class tempo to keep the safest fighting distance and eliminated the Chinese No.1 in Khabarovsk. Another Central Asian boxer Kyrgyzstan’s U21 National Champion Argen Kadyrbek Uulu was too strong for Armenia’s Samvel Milikyan at the light welterweight (63kg).
DPR Korea has got strong boxers in the lowest categories but the country sent athlete in the middleweight (75kg) to the ASBC Asian Confederation Boxing Championships. Following the Asian continental event their two hopes in this division impressed in Khabarovsk. Song Myong Su was too strong for Japan’s Ren Umemura firstly and after that success his teammate Pak Chung Song bowed out Hungary’s Isaac Oroyovwe in a hectic bout.
Omurbek Bekzhigit Uulu is a native talent in our sport who began boxing only in 2015 at the age of 15 but after four years of experiences, he reached the level of the elite national team in the Kyrgyz Republic. Their teenage talent had to meet with Mongolia’s Davaanyam Davaasuren who was also quarter-finalist in the ASBC Asian Confederation Boxing Championships as Bekzhigit Uulu. The Kyrgyz boxer felt the tempo better in their contest and won their bout which was a top one at the middleweight (75kg).

Kazakhstan's new generation shined in their National Spartakyad in Kyzyl-Orda