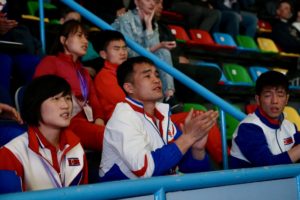 Twenty-eight bouts were held in the third competition day of the Korotkov Memorial Tournament in Khabarovsk which is located in the Russian Far East. Japan’s Tsukimi Namiki, Sena Irie, Ryomei Tanaka and Hayato Tsutsumi continued their strong world class performance on Day3 when the North Korean ladies also have done strong wins.
The competition was named by the hero of the Soviet Union Mr. Korotkov and the competition began on the Victory Day in Khabarovsk. Besides to the Russian teams, many European and Asian squads decided to attend in the strong Korotkov Memorial Tournament including Uzbekistan, Japan, Kyrgyzstan, Tajikistan, China, DPR Korea and Mongolia.

Japan’s Tsukimi Namiki returned with a clear success
Japan’s Tsukimi Namiki claimed bronze medal at the New Delhi 2018 AIBA Women’s World Boxing Championships which was her career highlight at the flyweight (51kg). Her teammate Mizuki Hiruta replaced her in the ASBC Asian Confederation Boxing Championships but lost her opening bout in Bangkok. Namiki, who will be turning to 21 this year, received another chance at the Korotkov Memorial Tournament and she controlled her quarter-final against Russia’s EUBC European Confederation U22 Boxing Championships silver medallist Olga Gurova in Khabarovsk.

Japan’s teenager Sena Irie continued her winning path in Khabarovsk
Japan’s Sena Irie was bronze medallist in the 2017 and in the 2018 editions of the AIBA Women’s Youth World Boxing Championships and joined to the elite age group this January. Following her gold medal in the National Championships, the 19-year-old boxer involved to the elite team and represented Team Japan in the ASBC Asian Confederation Boxing Championships in Bangkok. Irie eliminated her first rival in Khabarovsk on Day1 and defeated Mongolia’s teenage hope Erdenedalai Michidmaa in the quarter-finals. Irie will be meeting for the title contest with China’s experienced Liu Piaopiao who moved up to the featherweight (57kg) only in the recent months.

Ryomei Tanaka and Hayato Tsutsumi both advanced to the semi-finals
Japan’s Ryomei Tanaka moved back to the flyweight (52kg) last year and received the right to attend in the Jakarta 2018 Asian Games. The 26-year-old boxer, who won the Olympic Test Event in 2015, was slightly better than China’s Zhang Guo in the quarter-final and he is now a guaranteed medallist in Khabarovsk. His teammate Hayato Tsutsumi was gold medallist in the St. Petersburg 2016 AIBA Youth World Boxing Championships and he claimed two titles in the 2016 and in the 2017 editions of the ASBC Asian Confederation Youth Boxing Championships. Tsutsumi returned from his injury and won his second contest in Khabarovsk eliminating Mongolia’s Buyandalai Bayarkhuu.