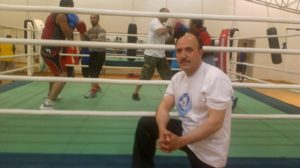 The President of the Asian Boxing Confederation and Vice-President of the International Boxing Association (AIBA) Mr. Anas Alotaiba, furthermore and the whole ASBC management are sending their sincere condolences to Mr. Hameedullah Hameedi’s family following the serious tragedy what happened in Kabul on Sunday. The Asian boxing family lost one of its greatness who worked as enthusiasm to develop our sport in Afghanistan.
Mr. Hameedullah Hameedi is one of Afghanistan’s most experienced boxing coaches and officials who was killed in an attack by gunmen in Khoshal Khan district of Kabul when he was on the way to his office. The spokesman of the Afghanistan Boxing Federation Mr. Mojeb Qarizada informed the media stakeholders about this inexplicable and brutal attack.
Mr. Hameedullah Hameedi worked as coach with the national team at the Milan 2009 AIBA World Boxing Championships and in the recent two editions of the ASBC Asian Confederation Boxing Championships in Tashkent and in Bangkok. Furthermore, he supported the Afghan team in the Amman 2013 ASBC Asian Confederation Boxing Championships and many other big international events.