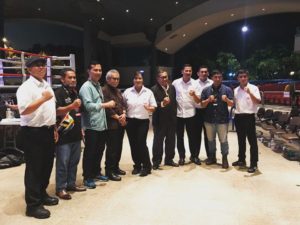 The Brunei Boxing Federation returned to the Asian map and hosted its first international event which was a great success and achievement of the country. The local Brunei boxers claimed seven out of the nine gold medals in the Interclub Tournament but Russia and Malaysia also took titles.
Brunei competed in the Southeast Asian Games and some other international events in the ‘90s and in the beginning of the last decade but since then their boxers did not attend any competitions. Brunei re-started their national events and its daily work in 2017 which is a great commitment from their new management to support our sport and it is the way of their development step by step.
The Brunei Interclub Tournament was their first activity in 2019 which was an international competition opened for boxers from Russia, Philippines and Malaysia as well. The country is planning to be active in the international stage in the upcoming years and return to the ASBC Championships after decades of hiatus.
Their next competition will be held in Brunei soon to increase the experiences of their boxers before joining to competitions out of the country. The region’s most important multisport event the next edition of the Southeast Asian Games is scheduled to be held in the Philippines this December and Brunei is aiming to make its return.
The first winner of the whole Interclub Tournament was Malaysia’s Ameerul Haiqal at the flyweight (52kg) who defeated a local boxer Mohamed Maqawi in the final. The second title was captured by Asde Nawang from the local Khalifa team who defeated Mohammed Al-Azim in the final.
Pahlawan’s Ariff Razali eliminated Nak Muay’s Haziq in the final of the lightweight (60kg) taking the second title for Brunei. Azri Yakob was too strong for Izzul Waie who represented the Gladiators Boxing Club in the event. Razaiman Shah of Nak Muay had to meet in the final of the welterweight (69kg) with Russia’s Shamil Omarov but he was able to manage his success in that narrow contest.
The further gold medallists of the event were Russia’s Saiful Maddikhanov (75kg) and three local boxers who won their first titles: Danny Sii (81kg), Abdul Haadi (91kg) and Mohammed Alif (+91kg). All of these three young hopes defeated boxers from Brunei’s different clubs by larger margin of differences.

List of the winners in the Brunei Interclub Tournament