Uzbekistan, Kyrgyzstan, Turkmenistan and Afghanistan exceeded their expectations in the ASBC Asian Schoolboys Boxing Championships reviewing the team rankings of the event 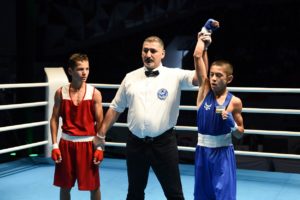 The first edition of the ASBC Asian Confederation Schoolboys Boxing Championships finished in Kuwait City a few days ago. Uzbekistan topped the team rankings in the historical competition while India became runner-up among the squads and Kazakhstan finished third in Kuwait City. Kyrgyzstan, Turkmenistan, Philippines, Afghanistan and Tajikistan were still in the Top8 which means the Central Asian region dominated the championship.
Altogether 150 boxers from 21 nations competed for the medals in the ASBC Asian Schoolboys Boxing Championships in 14 weight classes. The most crowded category was the 43kg weight class with its 16 participating boxers. Boxers who were born in 2005 and in 2006 were eligible to compete in the event for the 14 available titles.

Rank No.1 – Uzbekistan
Uzbekistan topped the team rankings with their 10 gold medals and all of their 14 boxers reached the semi-finals in Kuwait City. Uzbekistan’s performance was a clear dominancy over any other countries of the Asian continent proving their background is stronger than ever. The best performances within the Uzbek team produced by 13-year-old Farrukh Tulaganov (40kg), Umidillo Abdurasulov (43kg), Boburbek Bobojonov (46kg), Dalerjon Bozorov (52kg) and Shavkatjon Boltayev (64kg) in Kuwait City.

Rank No. 2 – India
Out of the participating 14 Indian boxers eight advanced to the semi-finals and among them sensationally seven joined to the finals. The final result of the Indian schoolboy team was two gold medals, five silver and one bronze in Kuwait City. The Best Boxer Trophy was achieved by Yashwardhan Singh at the 58kg weight class but tall Joon Bharat (70kg) also claimed gold medal in the event. Aryan (37kg) and Vinay Vishwakarma (49kg) were near to get also titles but both lost to their Uzbek opponents closely in the finals.

Rank No.3 – Kazakhstan
The rivalry between Kazakhstan and Uzbekistan are always the key moments in the ASBC Asian Championships. This time the Kazakh boxers were exceptional until the semi-finals, 10 out of their 14 talents reached the medal phase of the event. Most of their boxers lost to Uzbeks in the semi-finals and only three Kazakhs marched to the finals. Batyrkhan Seitenov (67kg) and Yerdos Sharipbek (+70kg) not only claimed the gold medals in Kuwait City but both boxers dominated all of their fights.

Rank No.4 – Kyrgyzstan
The Kyrgyz boxing team arrived with maximum number of 14 boxers to Kuwait City as Uzbekistan, India, Kazakhstan and the host country. Six Kyrgyz boxers advanced to the semi-finals which is one of the best performances of the Central Asian country in the recent years. Kyrgyzstan is waiting for his first ASBC Champion since 2013 and the gold was also missing from their collection in Kuwait City. Their three silver and three bronze medals are top results in this level and Bekzat Ergeshov (35kg) and Atay Asanbekov (70kg) was near to get gold in Kuwait City.

Rank No.5 – Turkmenistan
Turkmenistan could send only five boxers to the ASBC Asian Schoolboys Boxing Championships but four of them reached medals in Kuwait City. Dovlet Nurmuradov did not have realistic chance in the final of the 43kg weight class but his performance was over the previous expectations. The peak performance from Turkmenistan was delivered by Alisher Orazbayev who dominated his fights during the road to the finals of the 40kg and he had only a narrow loss to his Uzbek opponent.

Rank No.6 – Philippines
Philippines sent also five boxers to the ASBC Asian Schoolboys Boxing Championships as Turkmenistan and these athletes attended in the five smallest weight classes due the genetics of the Southeast Asian people. Reymond Lofranco (46kg) arrived to the event with nearly 100 bouts during his previous career and finally he took silver medal in Kuwait City. Philippines’ second medal a bronze was achieved by Robert Malunoc Jr. at the 35kg weight class.

Rank No.7 – Afghanistan
Afghanistan never ranked as high in the previous Asian team rankings as in this first edition of the ASBC Asian Schoolboys Boxing Championships. As Turkmenistan and Philippines, Afghanistan were able to send also five athletes to Kuwait City. The strong developments of the new Afghan management could recognize their first real successes and earned two bronze medals with excellent performance from 13-year-old Mohammad Younus Amiri (40kg) and Shirzai Masiullah (43kg).

Rakhmonov, Kudratov, Tojiyev and Rasulov won their next titles in the Uzbekistan Junior National Olympiad