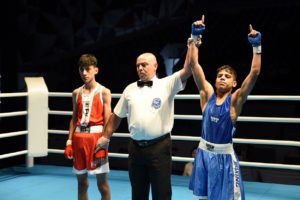 Altogether 34 bouts were held in the second competition day at the ASBC Asian Confederation Schoolboys Boxing Championships in Kuwait City. Asia’s leading nation Uzbekistan is still perfect after two days of boxing but Afghanistan and host Kuwait also won contests on Day2.
ASBC President and AIBA Vice-President Mr. Anas Alotaiba followed the bouts in the second day of the event in Kuwait City. Altogether 150 boxers from 21 nations are competing for the medals in Kuwait City’s Shaikh Al-Abdullah Sports Complex.
The ASBC Asian Schoolboys Confederation Boxing Championships is a new milestone in our continent and it is holding at the first time. Boxers who were born in 2005 and in 2006 are eligible to compete in the event for the 14 available titles.

Afghanistan’s second success was RSC and delivered by Masiullah Shirzai
Afghanistan won one contest in the opening competition day of the ASBC Asian Schoolboys Boxing Championships in Kuwait City. Their second success was achieved by Masiullah Shirzai at the 43kg weight class who started aggressively against Iraq’s Hussein Hasan in the first seconds. The Afghan boxer landed clear and tough punches in the first minutes quickly and won their contest by RSC before the break. Afghanistan’s next strong performance was delivered by Shirzai Mohammadi at the 52kg weight class who stopped Saudi Arabia’s Abdulaziz Darwish in a one-sided bout.

Kuwait’s Shabab Al-Abdullah delivered a big surprise on Day2
Justine Valero is not the most experienced team member in the Philippines but he was the favourite against Kuwait’s Shabab Al-Abdullah in their 43kg contest on Day2. The Penguin, which is the nickname of the Filipino boxer, was smaller than his local opponent but he started the bout aggressively. Kuwait’s best schoolboy did not give up the fight and he felt the support of the local crowd as well. The referee counted Valero in the third round which meant Al-Abdullah delivered one of the biggest surprises in the second competition day.

India’s Rupesh Bind and Uzbekistan’s Umidillo Abdurasulov won their contest with top skills on Day2
India’s Rupesh Bind won his national events with strong confidence and continued his good attitude in the ASBC Asian Schoolboys Boxing Championships. The 14-year-old Indian had excellent motivation against Thailand’s Kalaseeram Thanaphansakon in the opening round of their 43kg bout. The Indian boxer was quicker than his Southeast Asian opponent and won their contest by unanimous decision. Uzbekistan’s two-time Schoolboys National Champion Umidillo Abdurasulov spent only short time in the ring against Palestine’s Zain Ibrahim and the referee stopped their contest.

Kazakhstan’s Moldash and Vishwakarma proved top performance
Kazakhstan’s Sultan Moldash did not start well enough the first round against Kyrgyzstan’s Islam Imanidinov but he received good advices from his coaches to turn back their fight. Moldash stepped into the gas in the second round and eliminated his Kyrgyz opponent in a key contest at the 49kg weight class. In this division another tough fight was held between India’s Vinay Vishwakarma and Sri Lanka’s Tehan Sanchith Madabatiwage Rayman. The Indian boxer started also slowly in their bout as Moldash but he dominated the second and third rounds in Kuwait City.

Kazakhstan’s Batyrkhan Seitenov became the first guaranteed medallist in Kuwait City
Kazakhstan’s Batyrkhan Seitenov won their Schoolboys National Championships earlier this year who spent less than one round in the ring against Syria’s Younes Haidar when the referee confirmed his RSC success. The Kazakh boxer became the first one in Kuwait City who on his quarter-final and he is now a guaranteed medallist after his serious blows. Uzbekistan’s Shakhboz Khamidullaev replaced Boburbek Karimberganov in the national team but he controlled his quarter-final against Kyrgyzstan’s Mukhamed Dursunov and advanced to the last four at the 67kg weight class as Seitenov.

India’s Randeep and Kazakhstan’s Sharipbek are medallists in the +70kg weight class
Kyrgyzstan’s Zhoodarbek Saparbekov landed clear jabs and stopped India’s Randeep’s attacks in the first round of their heavyweight (+70kg) bout. The Indian southpaw increased his rhythm in the second and returned to the match with aggressive tactic. Randeep controlled the final round against his tiring Kyrgyz opponent and advanced to the semi-finals in Kuwait City. Kazakhstan’s Schoolboys National Champion Yerdos Sharipbek dominated his fight against Jordan’s Razi Ahmad Al-Hiasat and the Slovakian referee stopped their unequal contest in the second round.

Excellent footwork in the preliminary round of the 35kg weight class
India’s Harsh is a favourite at the 35kg weight class had to do his very best against Sri Lanka’s Senula Dulaj Weerasinghe to win their difficult contest. Uzbekistan’s Khumoyunmirzo Abdurasulov dominated his fight against Saudi Arabia’s newcomer Mohammed Arar and won the bout by RSC in the first round. Philippines’ Robert Malunoc Jr. had height disadvantage against Tajikistan’s Muinkhon Mavlonov but his pressurizing style was enough to win their tough contest. Kyrgyzstan’s Bekzat Ergeshov won two bigger events in the recent one year and in spite of the fact he did not deliver his best performance, he eliminated Kuwait’s Abdullah Al-Hajraf.

Tajikistan’s Dadajonov and India’s Ashish defeated tough rivals at the 52kg
Tajikistan’s Shakhboz Dadajonov claimed bronze medal at the 2018 Usman Halimov Schoolboys Tournament and he had enough experiences to control the opening round against Jordan’s Elias Ahmad Joudeh. The Tajik boxer increased his rhythm and his dominancy meant, he won the bout by RSC in Kuwait City. Kazakhstan’s 2018 Schoolboys National Champion Beybarys Kabdolla tried to keep the best fighting distance against India’s Ashish in the first round and landed nice jabs. The Indian talent worked closer range from the second and eliminated the first Kazakh boxer in the continental event.

Uzbek dominancy in the heavier weight classes
Uzbekistan’s team members proved clear dominancy in the heavier weight classes on Day2 when Abdulaziz Abdurakhmonov stopped Jordan’s Jafar Taimour Shishani at the 58kg weight class. Samarkand-based Shavkatjon Boltayev landed several tough hooks in his debuting contest against Iraq’s Mahdi Raad Hawi and finally he knocked out his rival at the 64kg. Aynazar Kenesbayev arrived from the Karakalpak region of Uzbekistan and continued his nation’s perfect performance in Kuwait City where he defeated Jordan’s Abdallah Dulkumoni in their 70kg weight class bout.