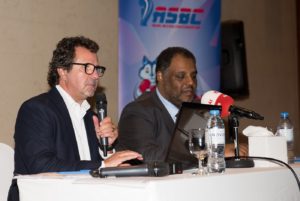 The Technical Meeting of the ASBC Asian Confederation Junior Boxing Championships was held in the Novotel Hotel in Fujairah, United Arab Emirates which confirmed the rules and all details of the competition. Altogether 239 boxers from 26 nations will be competing for the medals in Fujairah which is hosting the first ever ASBC Asian Women’s Junior Boxing Championships.

Mr. Hasan Hamad welcomed all of the teams, guests and participating nations in his opening speech on behalf of the Local Organizing Committee. ASBC Sports Director Mr. Omar Saleh Al-Jaberi welcomed also the teams and mentioned a few important details about this championship. The official Technical Delegate of the ASBC Asian Confederation Junior Boxing Championships is Mr. Pat Fiacco who led the meeting’s main part.

All participants shall to follow the AIBA and ASBC Disciplinary Codes and respect for all rules of the championships. The bouts will be held in three rounds of two minutes and one minute rest between them. All of the judging decisions are final in the ASBC Asian Confederation Junior Boxing Championships.

All of the equipments have been provided by the company of Green Hill in this championship where no tapes are allowed in the uniforms. The uniforms could be national colours as well according to the new AIBA rules which have been approved by the AIBA EC on February 2019. The Dubai Sports TV and the ASBC channels will be broadcasting the competition which has an own mobile application, the ASBC 2019 Junior which is another milestone in the Asian Boxing Confederation.