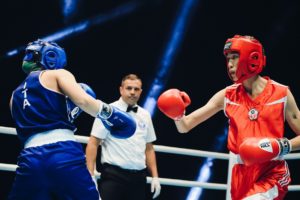 The Asian female boxers were amazed at the bantamweight (54kg), at the lightweight (60kg) and at the welterweight (69kg) on the seventh competition day at the AIBA Women’s World Boxing Championships in Ulan-Ude, Russia where the winners are advanced to the quarter-finals. Chinese Taipei’s strong duo Huang Hsiao Wen and defending champion Chen Nien Chin are both amazed on Day7.

Chinese Taipei’s Huang Hsiao Wen advanced to the quarter-finals
Chinese Taipei’s Huang Hsiao Wen has been attending in the international events since 2013 when she was a junior boxer. The 22-year-old promising boxer achieved silver in the last edition of the ASBC Asian Women’s Boxing Championships therefore her target is high at the bantamweight (54kg) in Ulan-Ude. Huang used her massive height advantage in the last 16 when she met with Italy’s teenager Giordana Sorrentino and controlled their whole fight from the first seconds. Huang will be meeting in the quarter-finals with Philippines’ Aira Villegas who eliminated Indonesia’s Ratu Silpalau in the next bout.

India’s duo Jamuna Boro and Lovlina Borgohain impressed against North African rivals in the sixth competition day
India’s Jamuna Boro worked strongly in the recent four years when she turned from youth to elite to reach the level of the national team. The Assam-based 22-year-old bantamweight (54kg) boxer did not give any chance to Algeria’s Ouidad Sfouh and in spite of the fact that she attends in her first major elite event, she advanced to the quarter-finals. Her teammate at the welterweight (69kg), Lovlina Borgohain was bronze medallist in New Delhi last November therefore she was the favourite against Morocco’s Oumayma Bel Ahbib. Borgohain, who is also 22 as Boro, eliminated her North African rival winning the bout by unanimous decision.

Kazakhstan’s Astana 2016 AIBA Women’s World Champion Dina Zholaman
Kazakhstan’s Astana 2016 AIBA Women’s World Champion is a 27-year-old experienced boxer at the bantamweight (54kg) who fought always in that category during her elite career. The Kazakh boxer was quarter-finalist already in the 2010 Bridgetown edition and she repeated that performance once again in Ulan-Ude but her final goal is the gold medal in Russia. Zholaman had to box in the last 16 with Ukraine’s lone competitor Inna Statkevych in the six day of boxing and her enthusiasm and aggressive tactic delivered for her a clear success in the front of the Kazakh spectators.

Mongolia’s Namuun Monkhor won her next fight at the lightweight (60kg)
Mongolia’s Namuun Monkhor was bronze medallist in the Guwahati 2017 AIBA Women’s Youth World Boxing Championships and quickly involved to the national elite team. The multiple National Champion Mongolian developed step by step in the recent four years and gave in everything to her next fight against Uzbekistan’s Raykhona Kodirova. The 20-year-old Mongolian had the strong motivation to win their contest and caught her Uzbek opponent already in the first round. Monkhor was able to keep her tempo and speed until the very end of the bout which means she is quarter-finalist at the lightweight (60kg) in Ulan-Ude.

Thailand’s third quarter-finalist in Ulan-Ude is Sudaporn Seesondee
Thailand sent five female boxers to the AIBA Women’s World Boxing Championships and all of them won their opening preliminary contests in Ulan-Ude. Their lightweight (60kg) star Sudaporn Seesondee is the Seed No.2 of the category who claimed silver medal in the New Delhi 2018 AIBA Women’s World Boxing Championships. The experienced Thai boxer eliminated Australia’s Commonwealth Games winner Anja Stridsman as first and as second she was also better than Kazakhstan’s Rimma Volosenko who won several international tournament titles.

Chinese Taipei’s defending AIBA Women’s World Champion Chen Nien Chin dominated her preliminary bout on Day6
Chinese Taipei’s Chen Nien Chin achieved her first medal in the AIBA Women’s World Boxing Championships in 2016 when she was only 19. The Rio 2016 Olympian won the gold medal in the last edition of the AIBA Women’s World Boxing Championships in New Delhi last November. Since then she claimed silver at the Bangkok 2019 ASBC Asian Women’s Boxing Championships and arrived with strong motivation to Ulan-Ude to regain her throne. Chen won all of the rounds in each scorecard against France’s Emilie Sonvico and advanced to the quarter-finals where she will be facing with a top opponent China’s Yang Liu who defeated Wales’ Commonwealth Games silver medallist Rosie Eccles.