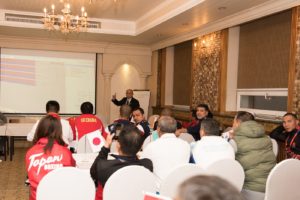 The official draw of the ASBC Asian Confederation Youth Boxing Championships was held in the Bayangol Hotel following the Technical Meeting of the event. The number of the countries is 16 in the ASBC Asian Confederation Youth Boxing Championships in Ulaanbaatar. The number of the boxers is 180 and among them 113 are male and 67 are female athletes.
The top boxing nations as Kazakhstan, and India arrived with maximum number of 20 boxers to the ASBC Asian Youth Boxing Championships. Chinese Taipei arrived with record number of 19 boxers to the new edition. Uzbekistan sent 18 boxers to this competition among the top nations but China, South Korea, host Mongolia, Iran and Thailand have also big teams in the competition. From the developing Asian countries Iraq, Singapore and Sri Lanka also sent boxers to the event to Ulaanbaatar.
The boxers who were born in 2001 or in 2002 are eligible to compete in the ASBC Asian Youth Men and Women Boxing Championships. Altogether 20 female and male champions will be crowned in the ASBC Asian Youth Men and Women Boxing Championships where 10 women and 10 men weight classes are in the official program.
Kazakhstan’s AIBA Women’s World Boxing Championships bronze medallist Anel Kudaybergen will be meeting with China’s new youth sensation Hu Meiyi in the quarter-finals of the light flyweight (48kg). Japan’s Bornemissza Youth Memorial Tournament winner Hikaru Shinohara is an amazing talent who will be boxing with India’s Rajni in another key quarter-final in this category.
Thailand’s Buenos Aires 2018 Youth Olympic Games winner Panpatchara Somnuek is one of the main gold medal contenders at the featherweight (57kg) who competed also high number of events this year. The 18-year-old Thai will be boxing as first with Uzbekistan’s Zhetysu Youth Cup gold medallist Sitora Turdibekova in a unique battle.
South Korea’s ASBC Asian Women’s Youth Boxing Championships silver medallist Jo Mi Hyun and India’s Neha Kasnyal will be meeting already in the preliminary round of the women’s lightweight (60kg) in Ulaanbaatar.
India’s multiple National Champion Selay Soy and Philippines’s promising Flint Jara will be boxing in a key fight at the men’s light flyweight (49kg). Kazakhstan’s AIBA Youth World Boxing Championships bronze medallist Makhmud Sabyrkhan had to box with Mongolia’s Altantulga Bayarsaikhan at the flyweight (52kg) which will be a tough as first for both athletes.
Mongolia’s strong Enkhtur Tegshjargal had to box with India’s Pardeep in the preliminary round of the men’s bantamweight (56kg). Another strong contest in this division will be held between South Korea’s ASBC Asian Junior Boxing Championship silver medallist Goh Seung Hun and Thailand’s Pricha Malunap.
Japan’s ASBC Asian Junior Champion star Reito Tsutsumi is unbeaten this year but his first opponent is also a well-experienced one, Kyrgyzstan’s Aidar Oroskulov at the men’s lightweight (60kg). In the same division among Mongolia’s best hopes, Tulga Oyunbaatar will be boxing with India’s Ankit Narwal in the preliminary stage.

Mr. Kishen Narsi led the Technical Meeting of the ASBC Asian Youth Boxing Championships which was taking place in the Bayangol Hotel