Mr. Kishen Narsi led the Technical Meeting of the ASBC Asian Youth Boxing Championships which was taking place in the Bayangol Hotel 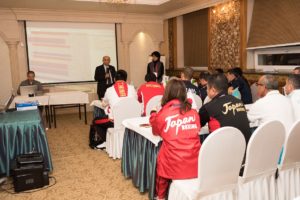 The Technical Meeting of the ASBC Asian Confederation Youth Boxing Championships was held at the Bayangol Hotel in the capital city of Mongolia in Ulaanbaatar which is the first continental event in the country after seven years of break.
Altogether 180 boxers from 17 nations will be competing for the medals and titles in Ulaanbaatar. The number of the male boxers is 113 furthermore 67 female athletes are also attending in Ulaanbaatar. The 2018 edition of the ASBC Asian Youth Boxing Championships saw the first female and male competition together in Bangkok.
The Technical Delegate of the ASBC Asian Youth Boxing Championships Mr. Kishen Narsi of India arranged the roll call of the meeting as first. The ASBC Executive Director Mr. Ali Salameh welcomed all of the participants on behalf of ASBC President Mr. Anas Alotaiba and introduced the officials of the competition.
The Competition Manager Mr. Ariunbold Ganbat of Mongolia extended his deepest greetings to all participants. ASBC EC member and President of the Singapore Amateur Boxing Association Mr. Syed Abdul Kadir also welcomed the delegations and expects hot battles in the cold weather. One of the officials, Mrs. Marina Ni of Kazakhstan supported the Technical Meeting with Russian translation.
Mr. Kishen Narsi informed the delegations about all details of the ASBC Asian Confederation Youth Boxing Championships including transportation, the general weigh-in, the schedule of the tournament and the medal ceremonies. The Deputy Supervisor of the competition Mr. Mohamed Kamel Shbib of Syria underlined some more important rules about the equipments and duties of the coaches in his speech.
All participants shall to follow the AIBA and ASBC Disciplinary Codes and respect for all rules of the championships. The bouts will be held in three rounds of three minutes and one-minute rest between them. All of the judging decisions are final in the ASBC Asian Confederation Youth Boxing Championships.
Uzbekistan’s ringside doctor Mr. Dilshod Kazakov warned all coaches that due the cold weather all boxers need to wear warm clothes not to get ill in the first stage of the championship. All of the male boxers have to arrive to the general weigh-in shaved while Mr. Kazakov also underlined the most important and possible medical issues.