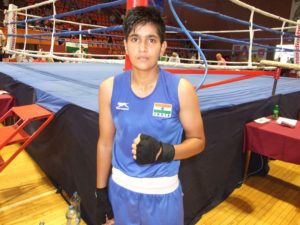 The Junior Nations Cup is one of the strongest and most difficult international tournaments in this age group which started in the city of Vrbas in Serbia. The Indian girls impressed in the opening contests of this strong event and among them Priyanka stopped a Russian opponent. Uzbekistan and Kazakhstan also won key contests in the event following their Sabina Bobokulova and Sultan Babakhanov proved world class boxing.
India, Kazakhstan and Uzbekistan are the strongest Asian countries in the junior age group and all of the three sent boxers to the Junior Nations Cup. Many of the top nations including Russia, Ukraine, Romania, United States of America, Poland, Croatia, Sweden, Norway, Hungary and Serbia sent their best boxers to the competition.
The boxers who were born in 2003 or in 2004 are eligible to compete in the Junior Nations Cup which is a strong preparation event for the Asian juniors before our continental event. The ASBC Asian Confederation Junior Boxing Championships is scheduled to take place in the city of Fujairah on October 8-17.

Uzbekistan’s Sabina Bobokulova defeated a top European rival
Uzbekistan’s best female junior boxer Sabina Bobokulova won the Nations Women’s Junior Cup in Serbia this January and returned to the European country to win her next title. The 16-year-old Uzbek light flyweight (48kg) talent had to meet with Hungary’s EUBC European Women’s Junior Boxing Championships bronze medallist Laura Kovacs in Vrbas. The taller Hungarian tried to use her height but Bobokulova was enough aggressive to win her first contest by split decision in the event.

Devi and Preeti advanced to the next stage in Vrbas
The Indian junior girls are also strong favourites in any international tournaments and their squad has done excellent job in the opening contests of the Junior Nations Cup. India’s Huildrom Ambeshori Devi controlled her fight against Ukraine’s Yulia Honcharenko at the girls featherweight (57kg). Dahiya Preeti had to meet with another key boxer Hungary’s EUBC European Women’s Junior Boxing Championships bronze medallist Rebeka Dobos but she managed to win that contest at the lightweight (60kg).

Priyanka defeated her top Russian rival in the event
One of the best Asian successes in the Junior Nations Cup was delivered by India’s Priyanka who met with Russia’s Natalia Zavyalova in the first round of the girls welterweight (66kg). The Indian won several national events but a Russian boxer from their top squad is always a big challenge for anyone in the world. Priyanka was not enough shape in the first round and Zavyalova took the lead after two minutes of fight. The Indian pressurized her top Russian opponent and following her knock downs, the referee confirmed her RSC success.

Kazakhstan impressed with their male team in Vrbas
Kazakhstan sent their top male junior boxers to the Junior Nations Cup where Ruslan Kuzeubayev started strongly against Russia’s Amir Salikhov at the light bantamweight (52kg). Nursultan Altynbek controlled his fight over Sweden’s Kevin Bohm at the bantamweight (54kg) before Yerassyl Yermek was too smart for India’s Deepak at the featherweight (57kg). Kazakhstan’s top junior hope Sultan Babakhanov was in different level than Sweden’s Haron Ahmadi at the welterweight (66kg) while Ilyar Ashirov was also too strong for Russia’s Ismail Magomadov.

Mr. Hemantha Weerasinghe – It was great from ASBC to start the Asian Schoolboys Boxing Championships