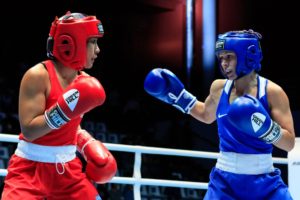 The Asian female boxers earned high number of successes in the sixth competition day at the AIBA Women’s World Boxing Championships in Ulan-Ude, Russia where the winners are advanced to the quarter-finals. Among the defending AIBA Women’s World Champions, icon Chungneijang Mary Kom Hmangte of India, Pang Chol Mi of DPR Korea and Lin Yu Ting of Chinese Taipei all three won their contests with top class of boxing.

DPR Korea’s defending champion Pang Chol Mi had a tough preliminary battle in the sixth competition day
DPR Korea’s Kim Hyang Mi advanced to the quarter-finals of the light flyweight (48kg) on Day5 and their biggest star defending AIBA Women’s World Champion Pang Chol Mi has done the same strong project in the sixth day of boxing. The North Korean boxer won also the Bangkok 2019 ASBC Asian Women’s Boxing Championships this April. Pang had to face with Ireland’s powerful Ceire Smith who had a brave attempt to eliminate the North Korean in their preliminary bout. The North Korean worked from longer distance but Smith was also enough tall to avoid Pang’s shots. The AIBA Women’s World Champion overcame the Irish attacks well enough in the second and third rounds to beat Smith in Ulan-Ude.

Japan’s Tsukimi Namiki advanced to last eight as in 2018
Japan’s Tsukimi Namiki earned bronze medal at the New Delhi 2018 AIBA Women’s World Boxing Championships at the age of 20. She was replaced at the flyweight (51kg) by Mizuki Hiruta at the Bangkok 2019 ASBC Asian Women’s Boxing Championships but she regained her place in the national team for Ulan-Ude. Namiki controlled the first round against Serbia’s Nina Radovanovic who was unable to use her aggressive tactic this time which she has done in the recent international events. The 21-year-old Japanese was quicker than her European rival and caught Radovanovic with jabs and hooks therefore Namiki advanced to the quarter-final stage of the weight class.

Vietnam’s Nguyen Thi Tam amazed in the sixth competition day
Vietnam’s Nguyen Thi Tam won the gold medal at the Ho Chi Minh City 2017 ASBC Asian Women’s Boxing Championships and silver in the 2019 edition. Vietnam’s best female boxer dominated the first round against Mongolia’s Lutsaikhan Altantsetseg and proved confident performance. The referee counted the Mongolian in the first round which determined the result of their bout and Altantsetseg was unable to find the rhythm. Nguyen kept her top performance until the end of the final gong and secured her place in the quarter-finals.

India’s legend Mary Kom defeated her Thai rival at the flyweight (51kg)
India’s six-time AIBA Women’s World Champion Chungneijang Mary Kom Hmangte has been fully focusing to get a title at the Tokyo 2020 Olympic Games which gold is still missing from her collection. India’s and the world’ most successful female boxer chosen an attacking tactic against Thailand’s taller Jutamas Jitpong who started well in Ulan-Ude. The 36-year-old Indian veteran competed at the flyweight (51kg) now but she was able to manage her success in her new division as well. The final verdict was unanimous decision in the favour of Mary Kom who eliminated her 15-year-younger Thai opponent on Day6.

Chinese Taipei’s Lin Yu Ting was untouchable for her Polish rival on Day6
Chinese Taipei’s Lin Yu Ting claimed the gold medal at the New Delhi 2018 AIBA Women’s World Boxing Championships where she fought in the bantamweight (54kg). Since then she moved up to the featherweight (57kg) but also won title at the Bangkok2 019 ASBC Asian Women’s Elite Boxing Championships. Lin used her height advantage against Poland’s Kinga Szlachcic in their meeting at the last 16 and she was almost untouchable for her European rival. Chinese Taipei’s pride not only worked from longer distance but in the second round she landed also strong jabs when she attacked the Polish. Lin dominated all of the rounds in their one-sided bout and advanced to the last eight of the division.

Thailand’s seventh success was earned by Nilawan Techasuep
Thailand’s female team amazed with their six-in-a-row triumphs at the AIBA Women’s World Boxing Championships. Jeju 2014 AIBA Women’s World Boxing Championships bronze medallist Chuthamat Raksat advanced already to the quarter-finals in Ulan-Ude on Day5. Nilawan Techasuep, who claimed silver in the Bangkok 2019 ASBC Asian Women’s Elite Boxing Championships, did not underestimate Latvia’s Amanda Millere and she was focused in the first round. The 25-year-old Thai caught her European rival with excellent hooks in the second and landed high number of punches in the third which has guaranteed her quarter-final place in Ulan-Ude.

China’s Zheng Lu technically overpowered her South American rival
China’s Zheng Lu replaced in the national team the defending AIBA Women’s World Champion Li Qian who has been fully focusing to the Olympic Qualification Event. Zheng had some good international results already and met with Ecuador’s Erika Stefania Pachito for a place in the quarter-finals at the middleweight (75kg). The South American moved ahead in the first round but she received punches from Zheng who had better technique than the aggressive Pachito. The 21-year-old Chinese boxer’s technical superiority determined the final result of their contest therefore Zheng also advanced to the quarter-finals.