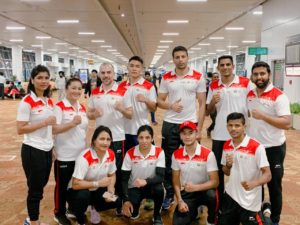 The boxing tournament of the Tokyo 2020 Olympic Games will be held in nine months next summer therefore the International Olympic Committee together with the local organizations arranged the Test Event in Japan’s capital city. The new open scoring system has been introduced in the three-day long competition at the Kokugikan Arena where the Asian continent achieved five gold medals.

Besides to the male boxers the women athletes also could attend in three weight classes at the Olympic Games Test Event in Tokyo which event was based on invitations. Among the Asian nations Kazakhstan, India, South Korea and host Japan competed in the Test Event with world class boxers which could be a strong experience for them before the big Games. Kazakhstan, Japan and India were the bests in the Test Event each of them won titles beating tough rivals in their respective finals.

Kazakhstan’s Saken Bibossynov won the first male title in the Test Event
Kazakhstan’s new hero, Saken Bibossynov claimed bronze medal at the Yekaterinburg 2019 AIBA World Boxing Championships which was his first big event during his career. The Kazakh flyweight (52kg) boxer eliminated Japan’s Rio 2015 Test Event winner Ryomei Tanaka in the semi-finals and he kept his focus until the very end of the tournament. The 22-year-old Kazakh boxer used strong tactic against Japan’s ASBC Asian Boxing Championships bronze medallist Tosho Kashiwasaki in the final and after the final gong, he celebrated his title in Tokyo.

India’s second gold was achieved by Shiva Thapa at the lightweight (63kg)
Pooja Rani achieved India’s first title in the Test Event and their second one was earned by their experienced male boxer, Shiva Thapa. The two-time Olympian and Amman 2013 ASBC Asian Champion Thapa has a strong motivation to attend in Tokyo next year after London and Rio de Janeiro but he has such a powerful national rival as Manish Kaushik who claimed bronze at the Yekaterinburg 2019 AIBA World Boxing Championships. The 26-year-old Indian proved tough performance in the Test Event beating Japan’s Yuki Hirakawa, another tough local hope Rio 2016 Olympian Daisuke Narimatsu and finally Kazakhstan’s 20-year-old ASBC Asian Youth Champion Sanatali Toltayev during his road to the title.

Japan’s lone title was earned by promising Sewon Okazawa
Japan has got strong potential for the Tokyo 2020 Olympic Games and their team achieved finally one gold medal in the Test Event. Sewon Okazawa is a new sensation who achieved medal at the Bangkok 2019 ASBC Asian Boxing Championships and he advanced to the last eight also in the Yekaterinburg AIBA World Boxing Championships this September. The 24-year-old Japanese defeated Great Britain’s AIBA Youth World Boxing Championships bronze medallist Mohammed Harris Akbar in the semi-finals of the welterweight (69kg) and continued his winning series against India’s Ashish Kulhriya in the final.

Kazakhstan’s 19-year-old Aibek Oralbay won the Test Event at the heavyweight (91kg)
Kazakhstan’s Buenos Aires 2018 Youth Olympic Games winner Aibek Oralbay realized the next big step in his career claiming the gold medal at the heavyweight (91kg) of the Olympic Test Event. The 19-year-old Kazakh, whose twin brother Nurbek is also a promising talent, met in the final with Brazil’s Abner Junior Teixeira who is a tough and experienced international boxer who defeated several of the top American stars this year. Oralbay felt the tempo and the distance better in their contest and won the title of the weight class achieving Kazakhstan’s second gold medal at the Kokugikan Arena.