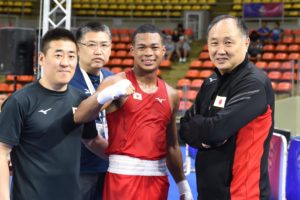 The highlight of next year, the Tokyo 2020 Olympic Games will be held in nine months therefore the International Olympic Committee together with the local organizations arranged the Test Event in Japan’s capital city. Japan’s Sewon Okazawa is one of the biggest discoveries this year who advanced also to the final of the welterweight (69kg) in Tokyo where Kazakhstan and India also shined on Day2.

The winners of the second day of boxing advanced to the finals in the Test Event in Tokyo. Besides to the male boxers the women athletes also can attend in the Olympic Games Test Event in Tokyo which event was based on invitations. Among the Asian nations Kazakhstan, India, South Korea and host Japan are attending in the Test Event with world class boxers which could be a strong experience for them before the Games.

Kawano vs. Fuchs for the title of the women’s flyweight (51kg)
Japan has got many strong options at the female flyweight (51kg) and one of them is Sana Kawano who had a hard job in the semi-finals against India’s former AIBA Women’s Junior World Champion Nikhat Zareen. Kawano, who won the last edition of the Japanese National Sports Festival, will be boxing for the title of the Test Event with United States’ AIBA Women’s World Boxing Championships bronze medallist Virginia Fuchs who eliminated Japan’s 19-year-old Rinka Kinoshita.

Kazakhstan’s Rimma Volosenko and India’s Pooja Rani are finalists in the female part of the Test Event
Kazakhstan’s Rimma Volosenko is a key boxer at the women’s lightweight (60kg) who won several tournaments in the recent three years. The 27-year-old boxer attended in the Ulan-Ude AIBA Women’s World Boxing Championships but she worked way better in the Test Event in comparison to her performance in the Russian event. Volosenko eliminated South Korea’s Ko Hyun Young in the quarter-finals of the division and continued her winning path against India’s Simranjit Kaur who earned bronze at the New Delhi 2018 AIBA Women’s World Boxing Championships. Volosenko will be meeting for the title with Brazil’s 20-year-old Gleisiele Gomes. Asia’s next female finalist in the Test Event is India’s Pooja Rani who eliminated Brazil’s Beatriz Soares at the middleweight (75kg).

Kazakhstan’s Saken Bibossynov impressed once again after Yekaterinburg
Kazakhstan’s Saken Bibossynov claimed bronze medal at the Yekaterinburg 2019 AIBA World Boxing Championships which was his first big event during his career. The Kazakh flyweight (52kg) boxer had to meet with Japan’s Ryomei Tanaka who won the gold medal at the 2015 Olympic Games Test Event in Rio de Janeiro. The 22-year-old Kazakh used his excellent footwork to land punches in the bout and his strategy worked well in Tokyo. Bibossynov will be meeting for the gold medal with Japan’s ASBC Asian Boxing Championships bronze medallist Tosho Kashiwasaki who eliminated South Korea’s Jo Se Hyeong in the second semi-final.

Exciting Thapa vs. Toltayev for the title of the male lightweight (63kg)
Two-time Olympian and Amman 2013 ASBC Asian Champion Shiva Thapa is one of the most experienced Indian boxers in their male team. The 26-year-old Indian defeated Japan’s Yuki Hirakawa at the lightweight (63kg) on Day1 and eliminated another tough local hope Rio 2016 Olympian Daisuke Narimatsu winning the bout by split decision. Thapa’s final opponent will be Kazakhstan’s 20-year-old ASBC Asian Youth Champion Sanatali Toltayev who stopped Australia’s Harrison Garside.

Japan’s Sewon Okazawa and Yuito Moriwaki are finalists in the Test Event
Japan’s Sewon Okazawa is a new sensation who achieved medal at the Bangkok 2019 ASBC Asian Boxing Championships and he advanced to the last eight also in the Yekaterinburg AIBA World Boxing Championships this September. The 24-year-old Japanese defeated Great Britain’s AIBA Youth World Boxing Championships bronze medallist Mohammed Harris Akbar and advanced to the final of the welterweight (69kg). The next Japanese finalist is Yuito Moriwaki who bowed out his Indian rival and will be boxing for the gold with Great Britain’s Lewis Richardson in the finals of the middleweight (75kg).