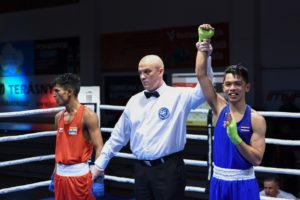 The final of the 38th edition of the Gee Bee Tournament were held in Helsinki, Finland today where the Asian boxers claimed three gold medals. Thailand’s young talent Thitisan Panmod, Kyrgyzstan’s ASBC Asian Champion Azat Usenaliev and India’s Kavinder Singh Bisht won titles for Asia on Day4. The four attending Asian teams India, Kazakhstan, Kyrgyzstan and Thailand all performed strongly in Helsinki.
The prestigious competition was a preparation event for the upcoming ASBC Asian Confederation Boxing Championships which is scheduled to be held in Bangkok on April. Following the Strandja Memorial Tournament the Gee Bee Tournament was another small World Championships with the participation of four Confederations’ boxers. Australia, Canada, England, France, Finland, Lithuania, Russia, Poland, Sweden and United States of America also fought for the medals in the Gee Bee Tournament.

Kyrgyzstan’s team captain Azat Usenaliev won the second Asian gold medal in the Gee Bee Tournament
Kyrgyzstan’s team captain Azat Usenaliev was gold medallist at the Amman 2013 ASBC Asian Confederation Boxing Championships and achieved bronze at the Jakarta 2018 Asian Games. The Kyrgyz flyweight (52kg) boxer won the Shopokov Memorial Tournament last month and he is in top form this year as well. He eliminated India’s AIBA Youth World Champion Sachin Siwach Singh with powerful performance in the semi-final. Usenaliev had another tough job against Kazakhstan’s Azat Makhmetov in the final which was a narrow contest in Helsinki. The Kyrgyz boxer was quicker than his Kazakh opponent which was the difference between them today.

India’s Kavinder Singh Bisht surprised favourite Muhammed Hussamuddin in the final of the bantamweight (56kg)
The Chemistry Cup is a strong European event but an Indian home final was held in Halle at the men’s bantamweight (56kg) last June which was won by Muhammed Hussamuddin. The same powerful story was happened with their talented boxers in the 38th Gee Bee Tournament in Helsinki after the semi-finals. Muhammed Hussamuddin had to meet in the final with his teammate Kavinder Singh Bisht, who moved up to the bantamweight (56kg) in the recent weeks and eliminated tough athletes such as Kyrgyzstan’s Almanbet Alibekov and France’s strong Jordan Rodriguez during his road to the finals. Singh used strong footwork from the first seconds and his speed was controlled the first round of their final. In spite of the fact Hussamuddin was the favourite of their battle Singh could win the title at the Gee Bee Tournament in Helsinki.

India’s Shiva Thapa and Dinesh Dagar both claimed silver medals
India’s Shiva Thapa was ASBC Asian Champion and AIBA World Boxing Championships bronze medallist in the last Olympic era but in the new one he was not able to repeat those strong results yet. Thapa was enough strong in the the semi-final of the lightweight (60kg) when he defeated Russia’s new national team member Mikhail Varlamov. The 25-year-old two-time Olympian Indian boxer finally claimed silver medal in Helsinki following his loss to Finland’s best elite boxer Arslan Khataev who felt the support of the home crowd in their spectacular final. His teammate Indian Open International Boxing Tournament runner-up Dinesh Dagar exceeded the expectations and finally claimed silver at the welterweight (69kg) in Helsinki where he lost to only England’s star Pat McCormack.