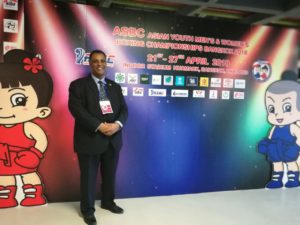 Mr. Omar Saleh Omar Al-Jaberi was officially appointed as Sports Manager of the Asian Boxing Confederation (ASBC) today. His new position stated in the official ASBC letter which was approved by AIBA Vice-President and ASBC President Mr. Anas Alotaiba of United Arab Emirates.
The AIBA Congress was taking place in the Russian capital in Moscow one and half month ago where the affiliated National Federations elected the leaders of the boxing world and Asia. The newly elected President of the Asian Boxing Confederation is Mr. Anas Alotaiba of United Arab Emirates and he appointed Mr. Omar Saleh Omar Al-Jaberi as ASBC Sports Manager today.
Mr. Omar Saleh Omar Al-Jaberi was born in Abu Dhabi in the United Arab Emirates on March 27 in 1973. He finished his studies in Abu Dhabi where he finalized Bachelor Level of Science in electronics engineering.
Mr. Al-Jaberi joined to the world of boxing in 2002 and started his work in the United Arab Emirates Boxing Federation. He started his works in boxing as Referee & Judge following his various level of courses.
He has done successfully the AIBA 1-star and AIBA 2-stars Referee & Judge Courses in the recent years. Mr. Al-Jaberi operated the scoring systems and officiated all local championship in the United Arab Emirates as Supervisor.
Mr. Al-Jaberi has done his successful ITO exam in Almaty, Kazakhstan in October 2016. He worked as ITO (International Technical Official) in several competitions in 2017 including ASBC championships. Mr. Al-Jaberi officiated the boxing tournament of the Buenos Aires 2018 Youth Olympic Games as ITO this October.
Mr. Al-Jaberi’s experiences in the boxing world and his well-known positive personality will be strengthening in the Asian Boxing Confederation and his work could be the way of success for Asia’s boxing life in the forthcoming years.