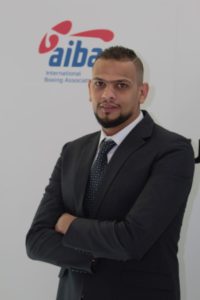 Mr. Bassam Ghanem was officially appointed as Administrative Director of the Asian Boxing Confederation (ASBC) today. His new position stated in the official ASBC letter which was approved by AIBA Vice-President and ASBC President Mr. Anas Alotaiba of United Arab Emirates.
The AIBA Congress was taking place in the Russian capital in Moscow one and half month ago where the affiliated National Federations elected the leaders of the boxing world and Asia. The newly elected President of the Asian Boxing Confederation is Mr. Anas Alotaiba of United Arab Emirates and he appointed Mr. Bassam Ghanem as ASBC Administrative Director today.
Mr. Bassam Ghanem was born in Mansoura City in Egypt on February 15 in 1986 and saw many of his teammates achieving medals in the boxing tournament of the Olympic Games and in the AIBA World Boxing Championships.
Mr. Ghanem interested about various kind of sports since his childhood and following his studies at the Delta Academy for Science, he was started to work in multiple companies in 2007 at the age of 21.
Following his multinational experiences Mr. Ghanem changed his environment and went to work to the United Arab Emirates and joined to the staff of the United Arab Emirates Boxing Federation and GCC Boxing Organizational Committee in 2012 as Public Relation Manager and Assistant Executive Secretary.
Mr. Ghanem’s enthusiasm, kindness and positive attitude will be strengthening in the Asian Boxing Confederation and his work could be the way of success for Asia’s boxing life in the forthcoming years.