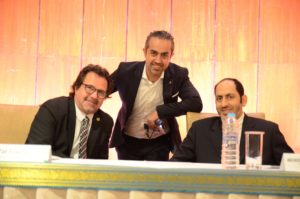 Mr. Ali Salameh was officially appointed as Executive Director of the Asian Boxing Confederation (ASBC) today which is stated in the AIBA letter which was sent to AIBA Vice-President and ASBC President Mr. Anas Alotaiba.
The AIBA Congress was taking place in the Russian capital in Moscow one and half month ago where the affiliated National Federations elected the leaders of the boxing world and Asia. The newly elected President of the Asian Boxing Confederation is Mr. Anas Alotaiba of United Arab Emirates recommended Mr. Salameh as Executive Director which was approved by AIBA President Mr. Gafur Rahimov and AIBA Executive Director Mr. Tom Virgets in Lausanne today.
Mr. Salameh was born in the capital city of the State of Kuwait in Kuwait City on March 7 in 1982. Following his studies at the Hashemite University in Jordan, Mr. Salameh was joined to work to the Jordan Football Federation in 2005. He switched to boxing and started work as General Secretary of the Jordan Amateur Boxing Association in 2009. He was Jordan’s Team Manager at the Milan 2009 AIBA World Boxing Championships as one of his debuts in the international boxing stage.
He was member of the Asian Boxing Confederation’s Youth Committee from 2010 until 2013. Mr. Salameh was among the first ones who has done his ITO (International Technical Official) exam successfully and worked several top ASBC events in the recent years. It was a remarkable moment in his career when Amman hosted the ASBC Asian Confederation Boxing Championships on July 2013.
Mr. Salameh moved to work to the United Arab Emirates Boxing Federation to develop boxing in the Gulf area as Executive Director a few years ago. Following his work as leading official in the Arabic region he was appointed as Executive Director of the Asian Boxing Confederation. His youthful enthusiasm to our sport could be the way of success for Asia’s boxing life in the upcoming years.

The Best of the Asians 2018 are revealed