Mr. Abdullah Al-Yami – Saudi Arabia will be attending in all of the upcoming international events 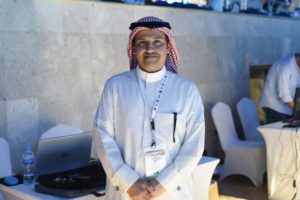 Mr. Abdullah Al-Yami is the Executive Director of the Saudi Arabian Boxing Federation who is also among the new generation of Asian officials. His country sent four boxers to the competition and in the future the developing country is planning to compete in all levels of international boxing.
Mr. Al-Yami had negotiations with the top management of the Asian Boxing Confederation in Kuwait City and followed the semi-finals of the ASBC Asian Schoolboys Boxing Championships from the venue on fourth day of boxing.
“This is a wonderful ASBC Asian Schoolboys Boxing Championships, I amazed here in Kuwait City and saw many world class fights. We arrived with four boxers to Kuwait City but our hopes are newcomers in the international stage and they have low number of national bouts as well.
The former head coach of the Algerian and Jordan national teams, AIBA 3-star Mr. Azzedine Aggoune joined to our coaching staff one month ago and he is still acclimatizing to our environment and started his work with our new teams.
We have altogether approximately 700 boxers from the schoolboys up to the elite level in the whole country but our target is to reach the number of 5000 boxers in the near future. We organized six national events in the recent season for all age groups but in the upcoming year we are planning to host 12 National Championships in Saudi Arabia.
Four of our boxers will be attending in the AIBA World Boxing Championships in Yekaterinburg, Russia next month. Before the event the elite team will be going for an international training camp to Poland including our best athlete Sajad Ali Al-Jassas.
We are planning to attend in all of the upcoming international competitions to increase the experiences of our boxers and to understand the best nations’ skills and techniques. We will be attending in all of the ASBC competitions in 2019 and in 2020.
We have three upcoming big projects in Saudi Arabia which will be supporting our boxers to reach an upgraded level in the future. The management of the Saudi Arabian Boxing Federation has signed a contract with a marketing company in terms of Olympic boxing development and promotion of boxing in 10 different cities across the whole country,“

Mr. Yousuf Ali Al-Kazim – The first edition of the Asian Schoolboys Boxing Championships is the success of ASBC