Kodituwakku and Saparamadu received the awards in the Clifford Cup by Mr. Dian Gomes 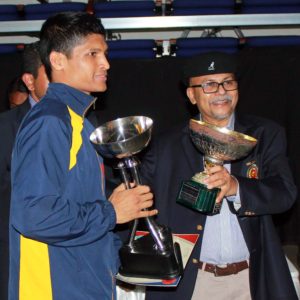 The prestigious Clifford Cup was held in Colombo where their women elite and men elite boxers could finish the busy year. A veteran returning athlete Anusha Dilrukshi Kodituwakku won the Best Woman Boxer Trophy while Hamburg 2017 AIBA World Boxing Championships competitor Dushan Dinidu Saparamadu won the Best Man Boxer Award in the Clifford Cup which gifts were presented by their President Mr. Dian Gomes.
After the Amateur Boxing Association of Ceylon formed in 1926, they conducted the National Championships from that year. It was a tournament at which even a single competitor could enter. Hence in order to encourage team participation which drew cheering crowds, a new tournament was introduced by the ABA in 1927. It was named after the British Governor then, Sir Hugh Charles Clifford.
Only teams could enter this tournament and teams had to consist of at least 4 competitors. A team could be Regiment or unit of the Army a Naval Command or the Sailors of a Ship, a Squadron of the Air Force or a team of an officiated club. If one goes though the past records depicted in the mini souvenir, it become evident that sailors from British Naval Ships, HMS Emerald and HMS Enterprise had won the this tournament in 1930 and 1933 respectively.
The security officers of the Taj Samudra Hotel had formed a boxing club, names it as Taj Boxing Club, completed and won this championships in 1984. At the inaugural year in 1927, Ceylon Garrison Artillery (CGA) had won this championships and the Governor Sri Clifford had been present at the finals to award the sterling silver cup to the CGA. In the annals of this tournament Army has been dominating. However it is a great pity that this prestigious cup has not been returned to the ABA by the Army since nineteen eighties. The present Clifford Cup awarded is a duplicate donated by Mr Donald Munasinghe in 1996.
The next edition of the Commonwealth Games will be held in Gold Coast, Australia in April 2018 and the event was their next selection for that important multisport competition. Sri Lanka competed in the recent editions of the Commonwealth Games with some successes and the South Asian country is hoping to get a medal in Gold Coast.
In the women part of the Clifford Cup Unichela BC topped the team ranking with their five titles, Hela BC was the runner-up while Air Force became third in Colombo. Among the men boxers Slimline became the No.1 with their six gold medals just ahead of Army Box Club and the Sri Lankan Navy.
Sri Lanka’s veteran woman boxer Anusha Kodituwakku was quarter-finalist in the 2010 AIBA Women’s World Boxing Championships and after a short break she returned to the world of the competitions. Kodituwakku, who is member of the national team since 2003, defeated R.N. Pushpakumari in the final of the women’s light flyweight (48kg).
ASBC Asian Confederation Women’s Boxing Championships competitor Dulani Anuradha Jayasinghe is their best woman flyweight (51kg) boxer who performed well enough and defeated H.S. Priyadarshani in the gold medal bout. Muthuthanthri Sajeewani Cooray is a national team member boxer and she was able to win the title of the bantamweight (54kg) following her silver medal in the National Trials.
Sri Lanka’s most experienced international female boxer Kasthuri Keshani Hansika lost in the final of the Layton Cup which was a big surprise but she was able to keep her focus and defeated all of her rivals in the Clifford Cup. Krismi Ayoma Dulanjani Dharmatilake shocked Borala Liyanage Sadareka in the final of the women’s lightweight (60kg) at the National Trials but this time the opposite result was delivered at the Clifford Cup.
Thanuja Nilakshi Dharmasena moved down to the women’s light welterweight (64kg) and following her international experiences she was too strong for her opponents in Colombo. The women’s middleweight (75kg) was won by ASBC Asian Confederation Women’s Boxing Championships bronze medallist Dapana Durage Shiromala Weerarathna in the Clifford Cup.
The title of the men’s light flyweight (49kg) was gone to Slimline’s W.A.C.I. Perera who was too smart in the final against R.M.P. Dharmasena. The men’s flyweight (52kg) delivered also top title contest which was finally won by the favourite Army’s Seneviratne Bandara who triumphed over Rohan Warnasuriya in the best bout of the men competition.
Hela’s Athuwulage Kasun Maduranga shocked the favourites of the bantamweight (56kg) at the Sri Lankan National Trials but this time he was defeated by U.N.K. Amarawansa in the final. Slimline’s R.M.A.B. Gunathilake proved strong performance and surprisingly he defeated National Trials winner Vimukthi Kumara at the lightweight (60kg).
Slimline’s ASBC Asian Confederation Boxing Championships quarter-finalist Dushan Dinidu Saparamadu competed well this year and qualified for also to the Hamburg 2017 AIBA World Boxing Championships. The 25-year-old Sri Lankan No.1 boxer, who achieved medals in several international events this year, dominated his final against R.W.M.S.B. Rajakaruna at the light welterweight (64kg).
ASBC Asian Confederation Boxing Championships competitor Sisira Kumarasinghe returned to the Clifford Cup in top shape and regained his throne in the welterweight (69kg). Sri Lanka’s top super heavyweight (+91kg) boxer Lahiru Tharanga B. Rathnadiwakara of Slimline was unstoppable by his main rivals and was able to stop Air Force’s M.W.M.M. Meegasthenna in the last final of the Clifford Cup.

Serik Konakbayev: In Kazakhstan sport is a fashion today