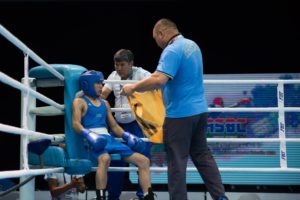 India proved its strength in the junior level
India sent their male junior boxers to the Bornemissza Memorial Tournament and many of their experienced hopefuls advanced to the next stage of the event on Day2. Soibam Yaiphaba Singh impressed against Spain’s Rafael Lozano Serrano which was a key contest at the junior pinweight (46kg). Rabichandra Singh Laishan stopped Hungary’s Martin Samuel in the first round and advanced to the next stage of the featherweight (57kg). Vanshaj had stronger rival on Day2 but he was able to manage his success over Denmark’s Victor Hoveling. Amandeep Singh is another experienced Indian junior who eliminated Hungary’s Gergo Ocsko at the light middleweight (70kg).

The Japanese junior boxers shined on Day2
Yuna Nishinaka attended only in national events in Japan previously and the Bornemissza Youth & Junior Memorial Tournament is her first international competition. In spite of her lack of experiences she spent less than two minutes in the ring when the referee confirmed her RSC success over Hungary’s Dorina Horvath. Subaru Takahashi is also a newcomer in the international stage but he was able to beat the favourite of the featherweight (57kg) Hungary’s Milan Muhovits in the second competition day. Japan’s next junior hope 15-year-old Mau Tagawa stopped Hungary’s Dominik Turei in the first round of the lightweight (60kg) and continued his winning path against another local boxer Bence Gero.

Zheksen won his quarter-final bout by KO
Kazakhstan’s ASBC Asian Junior Champion Biybars Zheksen is technically stronger than most of his opponents at the bantamweight (56kg) who knocked out Norway’s Mehdi Al-Gazzi proving his strength as well. Margulan Aidaruly is a newcomer in the Kazakh youth national team but he overwhelmed his Polish rival Michal Jarlinski at the welterweight (69kg). Kazakhstan’s ASBC Asian Junior Champion Yerassyl Zhakpekov, who was named as Best Boxer in the 2018 edition in Eger, knocked out Hungary’s Andras Komjati on Day1 and eliminated the local No.1 David Koczian winning the bout unanimously.