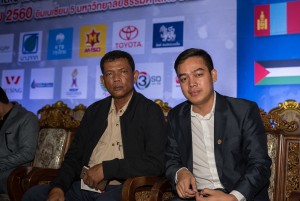 Mr. Sophoan Buy is the General Secretary of the newly formed Cambodian Boxing Federation who arrived with his President Prof. Dr. Chhoeung Yav Yen to the venue of the ASBC Asian Confederation Youth Boxing Championships to Bangkok to visit the competition and make negotiations with ASBC and Thailand Boxing Association.
Mr. Buy shared with us his thoughts about the event, the difficulties and strategic plans in Cambodia. The country will be competing in the upcoming Southeast Asian Games in Kuala Lumpur in August and finally their Federation in the Olympic boxing separated from their traditional Khmer boxing.
“We would like to say great thanks to the Thailand Boxing Association to invite us to the ASBC Asian Confederation Youth Boxing Championships to Bangkok where we can see the development of Asia’s boxing life and the current level of the athletes. We have got good relationship with the Asian Boxing Confederation and we are cooperating with several NFs already.
We are building up our National Federation which is a new one and I joined to the boxing world only a few months ago therefore we are open to cooperate with everyone in our region and continent. We have separated the Olympic boxing from our traditional Khmer boxing therefore we are a new Federation which was a historical step in my country.
The Cambodian Boxing Federation launched its official Facebook page in the recent weeks to be more transparency in the future. Currently 10 clubs are joined to our Cambodian Boxing Federation and hoping to be raised this number in the near months.
Currently we have got one national event in every a year, the National Championships for our best men and women athletes. We were able to involve boxing to the official program of the Cambodian National Games which was at the very first time in November 2016.
We have got currently elite and youth national team which we formed in the recent months and these athletes are really young. We have got a Cuban coach but we need more foreign coaches in the future to develop our Cambodians.
Our elite team will be preparing in a training camp in Thailand from July 15 before the Southeast Asian Games. We can send 5 male boxers to Southeast Asian Games to Kuala Lumpur, Malaysia after the training camp. We are working hard to join also to the ASBC Asian Confederation Women’s Boxing Championships which will be held in Ho Chi Minh City this November.
In long term we have been preparing to the 2023 edition of the Southeast Asian Games which will be held in our country in Cambodia at the very first time.”

said Mr. Sophoan Buy during his stay in Bangkok.