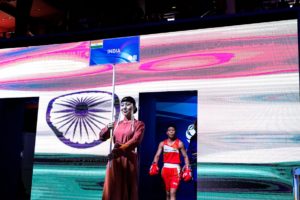 The semi-finals have been held in the ninth competition day at the AIBA Women’s World Boxing Championships in Ulan-Ude, Russia. India’s Manju Rani replaced their icon Chungneijang Mary Kom Hmangte in the national team at the light flyweight (48kg) but she is now finalist in her first ever AIBA event.

Altogether 17 Asian boxers from eight different nations advanced to the last four out of the 40 medallists in Ulan-Ude and among them seven joined to the finals. China, DPR Korea, India, Kazakhstan, Philippines, Thailand, Chinese Taipei and Vietnam earned medals in the event among the Asian countries.

India’s Manju Rani replaced Mary Kom effectively in Ulan-Ude
India’s Manju Rani is a 20-year-old talent at the light flyweight (48kg) who replaced six-time AIBA Women’s World Champion Chungneijang Mary Kom Hmangte. The Indian boxer was arrived to Ulan-Ude as a secret favourite following her performances in the international tournament. The Indian youngster was slightly better than Thailand’s Chuthamat Raksat in the semi-final which means Rani advanced to the final while her Southeast Asian opponent claimed bronze one again following her first one in 2014. The Indian boxer will be meeting for the title with Russia’s Ekaterina Paltseva who eliminated England’s Demi-Jade Resztan. This Ulan-Ude event is India’s best ever performance out of their country in the history of the AIBA Women’s World Boxing Championships.

Philippines’ Nesthy Petecio can prepare to her second final in the history of the AIBA Women’s World Boxing Championships
Philippines’ best female boxer Nesthy Petecio claimed silver medal in the Jeju 2014 AIBA Women’s World Boxing Championships and she repeated at least that performance in Ulan-Ude. Petecio won high number of international tournaments in the recent two and half years but she had to do her very best against England’s new sensation Karriss Artingstall who earned silver in the EUBC European Women’s Boxing Championships. Petecio will be boxing for the gold medal with Russia’s local boxer Liudmilla Vorontsova who had an unbelievable win over Chinese Taipei’s star and defending champion Lin Yu Ting.

China’s Dou Dan has the chance to defend her throne in Ulan-Ude
China’s experienced Dou Dan is the defending AIBA Women’s World Champion at the light welterweight (64kg) who had confident successes during her road to the final in Ulan-Ude. The Chinese boxer met in the semi-finals with Russia’s Kazakhstan-born 20-year-old Ekaterina Dynnik who tried to use a strong tactic against Dou Dan. The Chinese star impressed in the second part of their semi-finals and her effective jabs delivered for her a place in the finals. Dou Dan can defend her throne against Italy’s Angela Carini who was silver medallist in the EUBC European Women’s Boxing Championships and moved down one category.

China’s Wang Cong and Yang Xiaoli also advanced to the finals of the AIBA Women’s World Boxing Championships
China’s Wang Cong replaced stars in the national team and delivered one of the main sensations in the ninth day of boxing when she eliminated Finland’s Rio 2016 Olympic Games bronze medallist Mira Potkonen at the lightweight (60kg). Wang will be meeting with Brazil’s Beatriz Ferreira who eliminated United States’ Rashida Ellis in another hectic contest. China’s veteran Yang Xiaoli also won her semi-final when she met with Kazakhstan’s Dina Islambekova at the heavyweight (+80kg). The three-time AIBA Women’s World Champion Chinese will be boxing for the title with United States’ strong Danielle Perkins to defend her throne.