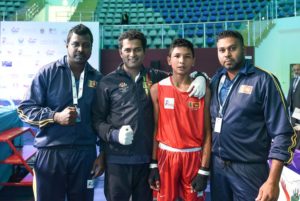 India’s Vijay Singh won his tough opening contest in Fujairah
India’s Vijay Singh had to meet as first with Chinese Taipei’s Lin Hung Hsing who is also an experienced boxer at the flyweight (50kg). The Indian tried to control the first round but Lin was also competitive and responded with tough hooks. Chinese Taipei’s new pride moved forward more than in the first round but the Indian counter-attacks were effective in the second part of their contest. The Indian was bronze medallist in the Junior Nations Cup this August and the Pune-based boxer won his debuting contest.

Uzbekistan’s Gofurjon Tokhirov defeated his second rival in the event
Uzbekistan’s Gofurjon Tokhirov was involved to the junior national team only in the final minute but he impressed in his first contest in Fujairah. The 16-year-old Uzbek had to meet with Mongolia’s Tuya Naraanbaatar who won their Children National Games in August. Tokhirov used his unpredictable movements to find the best attacking angles in the first round when he impressed once again. The 16-year-old Mongolian landed also good punches in the second but Tokhirov had tough performance once again and won his second fight in Fujairah.

South Korea’s first success in Fujairah was taken by Park Jeong Hyeon
South Korea’s Park Jeong Hyeon claimed his first national medal already in 2016 and the Daegu-based boxer arrived to Fujairah as a medal favourite. The Korean featherweight (57kg) boxer started his opening bout aggressively against Jordan’s tall Anas Alsadi and reduced the fighting distance. The South Korean southpaw was quicker than his inexperienced opponent from Jordan and controlled all of the three rounds in their contest. Park became the first South Korean boxer who could win a contest at the ASBC Asian Junior Boxing Championships in the city of Fujairah.

Philippines’ Dave Asi Laurejas and South Korea’s Kang Jeong Min amazed the crowd in the third competition day
South Korea’s Kang Jeong Min won already five national events in the recent three years and he was named as one of the most talented juniors from his country. Kang, who trains also in Daegu as Park Jeong Hyeon, started well in the first round against Philippines’ Dave Asi Laurejas. The Filipino bantamweight (54kg) boxer also started his career six years ago and he was able to handle their tactical fight. Laurejas impressed in the second part of the bout and his great finish delivered for him a narrow success in a superb fight.

Uzbekistan’s Bilolbek Ikhvolov bowed out one of his main rivals at the featherweight (57kg)
Uzbekistan’s Bilolbek Ikhvolov is a 15-year-old talent who is spending his first year among the juniors. The Uzbek talent had to face with India’s one of the best juniors Rabichandra Singh Laishangbam who claimed silver medal in the strong Bornemissza Junior Memorial Tournament in Hungary this June. The taller Indian used his distance well in the first round but Ikhvolov adopted the rhythm of the bout quickly. The younger Uzbek was more confident from the second round and eliminated one of his main rivals already in the preliminary stage.

The Iranians continued their tough performance in Fujairah
The Iranians started strongly in the first two days of boxing when their boxers won all of their four contests in Fujairah. Iran’s Amirmohsen Orjalizadeh had to meet with his neighbouring rival Iraq’s two-time Junior National Champion Haseet Matheel Al-Sadik at the flyweight (50kg) and he was able to win their narrow fight in Fujairah. The second Iranian in the third competition day also impressed as Soheil Allahveran spent less than one round in the ring when the referee stopped his contest against United Arab Emirates’ Hazza Nasser Al-Ghafri at the light welterweight (63kg).

Philippines’ Eljay Pamisa defeated the main Kazakh gold medal contender at the pinweight (46kg)
Philippines has got strong traditions in the smallest weight class where their new boxer in the junior national team is Eljay Pamisa who has strong connections to boxing. His opponent was the main gold medal contender of the pinweight (46kg) Kazakhstan’s Nurkhan Zhylkybay who is only 15 but Asia’s best in the category. The Kazakh boxer won the Junior Nations Cup in Serbia two months ago and he started with quick punches in their bout which was the early final in Fujairah. Pamisa adopted the rhythm rapidly in this remarkable contest and turned back their superb fight.

Uzbekistan’s favourite at the light flyweight Asrorbek Shakhobiddinov eliminated a tough Mongolian
Uzbekistan’s Asrorbek Shakhobiddinov is the main favourite for the gold medal at the light flyweight (48kg) who met as first with Mongolia’s Baigali Bayarerdene. The 16-year-old Uzbek, who is unbeaten this year, controlled the first round with his jabs but the Mongolian responded also in the opening minutes. The Heydar Aliyev Junior Cup winner Uzbek changed some tactical elements after the first break and marched into the quarter-finals of this strong weight class.

India’s Jaydeep Rawat is the first guaranteed medallist in Fujairah
India’s Jaydeep Rawat started boxing in 2014 and after five years of experiences in our sport he was involved to their junior national team. The Pune-based boxer had to meet with Chinese Taipei’s Wang Wei Lin at the welterweight (66kg) and became the first guaranteed medallist in Fujairah. The second semi-finalist in this weight class is Kyrgyzstan’s 15-year-old newcomer in the national team Daniel Abdrakhmanov who eliminated Kuwait’s Jaber Al-Enezi in the evening session of Day3.

Kyrgyzstan’s Sagyn Satybaldy Uulu eliminated Kazakhstan’s Adilzhan Zhandarbek in a fantastic fight
Kyrgyzstan’s Sagyn Satybaldy Uulu claimed silver medal in the Heydar Aliyev Junior Cup in Azerbaijan and also at the Makanalin & Nokerbekov & Satenov Junior Memorial Tournament in Kazakhstan this year. The most experienced Kyrgyz junior moved down to the light welterweight (63kg) before the start of the event and impressed on Day3 when he met with Kazakhstan’s favourite Adilzhan Zhandarbek. Satybaldy Uulu had already 118 fights during his career and his style was followed on his boxing idol Daniyar Yeleussinov. The Kyrgyz No.1 worked world class on feet and his counter-punches delivered for him a superb success in Fujairah.