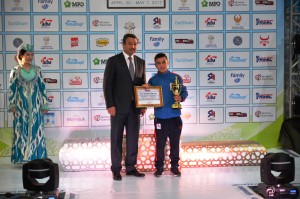 Hasanboy Dusmatov claimed gold medal at the light flyweight (49kg) in the ASBC Asian Confederation Boxing Championships in Tashkent and won also the Best Boxer Trophy of the event on May 8. Following the voting of the fans the Uzbek boxer was named as the ASBC Athlete of the Month in May.
Uzbekistan’s new sensation at the light flyweight (49kg) Hasanboy Dusmatov was born in the city of Andizhan on June 24 in 1993. He began his boxing career very early at the age of 11 in Andizhan where Uzbekistan’s excellent sport academy of boxing is located. He is studying in the Andizhan State University and he is in the strong Uzbek boxing school where all of the age groups are in the world class level.
Hasanboy Dusmatov won the gold medal at the 2011 Uzbek Youth National Championships and he was quickly involved to the national elite team. He claimed silver at the Kulibayev Tournament, bronze in the Sidney Jackson Memorial Tournament but won the titles in the Makar Mazay Memorial Tournament in Ukraine and also in the Kadyrov Memorial Tournament in Grozniy, Russia in 2012 at the age of 19.
Following his next great tournaments in 2013 unbeaten Uzbekistan’s Hasanboy Dusmatov robbed into the world of boxing in 2013 when he won the Summer Universiade in Kazan, Russia. He defeated strong boxers from Azerbaijan, Tajikistan, Mongolia and Korea in that event and has been crowned in the important competition.
Dusmatov defeated Kazakhstan’s Birzhan Zhakypov in a preparation event in Astana but on their re-match in Almaty at the 2013 AIBA World Boxing Championships he lost by points in a heroic battle. Dusmatov was invited by the Ukrainian Otamans franchise and competed in the Season IV and Season V in the World Series of Boxing. He won all of his eight WSB bouts in 2014 and in 2015 and almost qualified to the Rio 2016 Olympic Games ranking as No.2 at the light flyweight (49kg).
During his great march in the World Series of Boxing Dusmatov defeated China’s young star Lu Bin in the Incheon 2014 Asian Games where he missed the medal as Philippines’ London 2012 Olympian Mark Anthony Barriga stopped him in the quarter-finals. Dusmatov had also an unexpected loss in the 2014 Uzbek National Championships where he was defeated by Abdulla Kuchkarov therefore he raised his activities in the training sessions.
Dusmatov eliminated AIBA Team’s Laishram Devendro Singh in the semi-final of the ASBC Asian Confederation Boxing Championships in Bangkok and had to meet with Philippines’ Southeast Asian Games silver medallist new sensation Rogen Ladon. He had to reduce the fighting distance against his taller Filipino opponent but Dusmatov had clear punches in the final round and deserved the gold medal in the ASBC Asian Confederation Boxing Championships in Bangkok which was his best performance last year.
Dusmatov qualified to the Doha 2015 AIBA World Boxing Championships but sensationally he lost his opening bout to Azerbaijan’s tall teenager Rufat Huseynov which contest was a real tactical one. The Uzbek boxer was more than disappointed after that loss but he was strong in mind and focused to his next event, their National Championships where he won the gold medal after beating Nodirjon Mirzakhmedov in the final.
Uzbekistan’s defending ASBC Asian Confederation Boxing Champion Hasanboy Dusmatov eliminated an Indian hope, Nanjing 2014 Youth Olympian teenager Shyam Kumar Kakara winning the contest by large margin of difference in the semi-final of the Rio Test Event in Brazil. Dusmatov continued his excellent winning series against Brazil’s APB boxer and AMBC American Confederation Champion Patrick Lourenco which delivered for him a gold medal at the Rio Test Event.
The first gold medal of the AIBA Asian & Oceanian Olympic Qualification Event went to Uzbekistan in the end of March this year when Hasanboy Dusmatov defeated Philippines’ Rogen Ladon which was the repeat match of the final of the 2015 ASBC Asian Confederation Boxing Championships and the result became the same. Dusmatov qualified for the Rio 2016 Olympic Games where he was named as one of the top favourite.
The Uzbek light flyweight (49kg) star dominated all of his contests in the road to the final and he was more successful in the first round against Colombia’s Yuberjen Martinez. Dusmatov dominated the second round, he was really effective with his left-handed hooks and took the lead after six minutes clearly.
The 23-year-old Uzbek boxer was confident and claimed the first gold medal of the boxing tournament of the Rio 2016 Olympic Games. Dusmatov claimed Uzbekistan’s second gold medal in the history of the Olympic boxing after Makhammatkodir Abdullaev’s first success in the Sydney 2000 Olympic Games. After all finals Dusmatov received the Val Barker Trophy as the best boxer of the Olympic Games.
Uzbekistan’s star Rio 2016 Olympic Champion Hasanboy Dusmatov eliminated Sri Lanka’s Thiwanka Ranasinghe, Kazakhstan’s new national team member Yerzhan Zhomart and India’s National Champion Amit Panghal in the road to the finals. Dusmatov met for the title with Mongolia’s Rio 2016 Olympian Gankhuyag Gan-Erdene and he tried to beat his taller opponent with well-built tactic. The Val Barker Trophy winner Uzbek star controlled mainly the second part of their final and defended his throne in Asia.