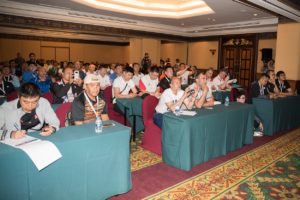 Key bouts in the first round of the ASBC Asian Confederation Boxing Championships
Iran’s Omid Ahmadisafa won four international tournaments in the recent one year and the tough Persian will be boxing with Philippines’ Ramel Macado at the men’s light flyweight (49kg). Philippines’ traditions in the lowest category are high therefore their contest is one of the most anticipated one in the preliminary stage.
Thailand’s Rujakran Juntrong defeated Indonesia’s Farrand Papendang in the quarter-final of the Jakarta 2018 Asian Games and both boxers can prepare to their re-match in the first preliminary round of the lightweight (60kg) in Bangkok.
Jordan’s Obada Al-Kasbeh claimed silver medal at the Amman 2013 ASBC Asian Confederation Boxing Championships and bronze at the Incheon 2014 Asian Games. The Rio 2016 Olympian Jordanian boxer will be meeting with a dangerous opponent China’s Wang Gang in first round of the the men’s light welterweight (64kg).
South Korea’s Kim Hyeong Kyu and Syria’s Alaa Eldin Ghossoun both were born in 1992 and had strong results in the recent eight years. The former ASBC Asian Champion Korean and Arab Champion Ghossoun both moved up to the heavyweight (91kg) and had to face each other in a top contest.
Vietnam’s defending ASBC Asian Women’s Champion at the flyweight (51kg) Nguyen Thi Tam is among the favourites this time as well in Bangkok. Vietnam’s No.1 will be boxing first with Japan’s Mizuki Hiruta who robbed to the best boxers of the world one year ago when she claimed silver medals in top international events.
Philippines’ AIBA Women’s World Boxing Championships Nesthy Petecio had almost perfect record in the international stage in 2018 but following her issues she could not prepare well enough to Bangkok. In spite of her lack of trainings Petecio is still among the favourites at the featherweight (57kg) where her first rival will be Japan’s two-time AIBA Women’s Youth World Boxing Championships bronze medallist 19-year-old Sena Irie.
Thailand’s Sudaporn Seesondee claimed silver medal at the lightweight (60kg) in the New Delhi 2018 AIBA Women’s World Boxing Championships. Thailand’s gold medal contender will be meeting with China’s Astana 2016 AIBA Women’s World Champion Yang Wenlu in the preliminary round of the competition.