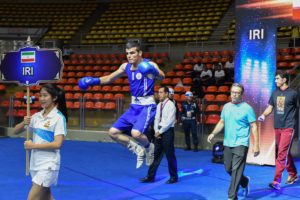 The Iranian Boxing Federation’s next international event will be held in the city of Chabahar from February 22 until March 2 in 2019. The competition is scheduled to take place for the men’s elite boxers and the event will be a preparation for the ASBC Asian Confederation Boxing Championships and other important goals in 2019.
The Iranian Junior National Championships is underway in the city of Hamedan with the participation of 206 male boxers from the teams of 31 different regions but their Boxing Federation is focusing already to the next year’s targets.
Besides to the medals cash prizes will be awarded for the best teams during the International Elite Men’s Tournament. All participating team allowed to take maximum number of 10 men’s elite boxers and four officials to the city of Chabahar.
The teams are responsible to arrange their flight tickets to Chabahar but the Iranian Boxing Federation will be covering all of other part of the competition such as accommodation, meals and local transportation for maximum 10 boxers and 4 officials per teams. The registrations are open for each National Federation for one of the first big events of 2019.