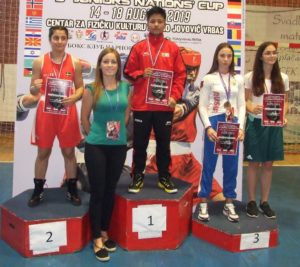 The 3rd Junior Nations Cup is one of the strongest and most difficult international tournaments in this age group which saw five competition days in the city of Vrbas in Serbia. The Indian girls won four gold medals in the event while the Kazakh boys earned seven titles in this powerful European tournament.
Currently India, Kazakhstan and Uzbekistan are the strongest Asian countries in the junior age group and all of these three nations sent strong boxers to the Junior Nations Cup to Serbia. Many of the top nations including Russia, Ukraine, Romania, United States of America, Poland, Croatia, Sweden, Norway, Hungary, North Macedonia and Serbia sent their best boxers to the competition.
The boxers who were born in 2003 or in 2004 were eligible to compete in the Junior Nations Cup which was a strong preparation event for the Asian juniors before our continental event. The ASBC Asian Confederation Junior Boxing Championships is scheduled to take place in the city of Fujairah on October 8-17.

India’s Tamanna won Asia’s first success in the Junior Nations Cup
Uzbekistan’s best female junior boxer Sabina Bobokulova won the Nations Women’s Junior Cup in Serbia this January and she was the main favourite at the light flyweight (48kg) in Vrbas as well but she lost her semi-final to Russia’s Alena Tremasova. In spite of her loss the gold medal of the category achieved by an Asian boxer, namely India’s Tamanna who exceeded the expectations with her performance in the day of the finals. The Russian is one of the best Europeans in this weight class but Tamanna used her speed to beat her in Vrbas.

India’s next titles were achieved by Devi, Priyanka and Preeti in the female part of the Junior Nations Cup
The Indian junior girls have been preparing to the upcoming ASBC Asian Junior Boxing Championships and arrived to Vrbas with powerful team. Following Tamanna’s gold medal, further of their hopefuls impressed in the Junior Nations Cup. Huildrom Ambeshori Devi was slightly better than Sweden’s Sipel Duna at the girl’s featherweight (57kg) achieving India’s second gold medal. Dahiya Preeti defeated Hungary’s EUBC European Women’s Junior Boxing Championships bronze medallist Rebeka Dobos and Ukraine’s Kristina Kartavtseva as well at the lightweight (60kg). India’s fourth gold medal was earned by Priyanka who eliminated two Russians as Natalia Zavyalova and Olga Petrashko during her road to the gold of the girl’s welterweight (66kg).

Kazakhstan’s first gold medal was achieved by Zhylkybay
Kazakhstan sent their top male junior boxers to the Junior Nations Cup and claimed finally seven gold medals out of the possible 13 male titles. The first title was earned by Nurkhan Zhylkybay who was too quick for Serbia’s Mile Jovanovic at the pinweight (46kg). His teammate Ruslan Kuzeubayev bowed out Russia’s Amir Salikhov during his road to the final of the light bantamweight (52kg) where he had a successful battle against United States’ Floyd Diaz. Nursultan Altynbek won the final of the bantamweight (54kg) where he was too strong for India’s Dikshant Dahiya.

Kazakhstan’s dominancy continued in the male finals
Kazakhstan’s Yerassyl Yermek was too smart for India’s Deepak in a key contest at the featherweight (57kg) and following that success, he defeated Russia’s Vadim Alekseev in the final of the event. Serik Abzal is one of the most promising lightweight (60kg) boxers in the whole world and the 16-year-old talent impressed against Russia’s EUBC European Junior Champion Maksim Shumov. Kazakhstan’s top junior hope Sultan Babakhanov was in different level than any of his opponents at the welterweight (66kg) and stopped also North Macedonia’s Ajhan Ozmen in a quick final. Kazakhstan’s seventh title was achieved by Rakhymzhan Shanzharkhan who had a tough final against Croatia’s Petar Kresimir Knezevic.