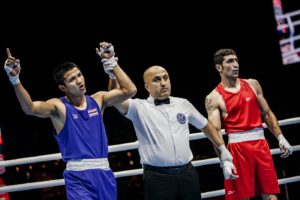 The fourth day of competition was held at the AIBA World Boxing Championships for the men’s elite in Yekaterinburg, Russia where boxers at the flyweight (52kg) and lightweight (63kg) fought out their place to the last 32. Out of the daily 30 contests our Asian boxers won 14 matches on Day4 which was the best performance from our continent. Thailand’s promising Somchay Wongsuwan celebrated his 23rd birthday with a success in the fourth competition day.
The Asian teams prepared strongly to the Yekaterinburg 2019 World Boxing Championships in the recent months after the Bangkok ASBC Asian Boxing Championships and our continent has got several medal and title favourites in Russia. Kazakhstan, Uzbekistan, India, China, Thailand, Philippines, Mongolia, Tajikistan, Jordan, South Korea, Kyrgyzstan and many other teams from our continent have got world class boxers.
Altogether 107 Asian elite male boxers are attending in the event from 21 nations: Afghanistan, China, India, Indonesia, Iran, Iraq, Japan, Jordan, Kazakhstan, South Korea, Kyrgyzstan, Mongolia, Philippines, Palestine, Qatar, Saudi Arabia, Tajikistan, Thailand, Turkmenistan, Chinese Taipei and Uzbekistan.
China’s Rio 2016 Olympic Games bronze medallist Hu Jianguan is in top form this year and arrived to Yekaterinburg as one of the favourites of the flyweight (52kg). The 26-year-old Chinese claimed bronze in the 2015 Doha edition and he is aiming for at least that performance. Hu dominated his opening fight against Afghanistan’s Indonesian President’s Cup silver medallist Ramish Rahmani and advanced to the next stage.
Indonesia’s Southeast Asian Games winner Aldoms Suguro was not in top form this year until the start of the AIBA World Boxing Championships but his efforts paid off in the opening bout against Ireland’s European Games bronze medallist Regan Daly. Another Asian surprise at the flyweight (52kg) was delivered by Jordan’s ASBC Asian Youth Boxing Championships bronze medallist 19-year-old Mohammad Al-Gharaghir who was brave against Serbia’s Dusan Janjic and eliminated his European rival.

Uzbekistan’s Rio 2016 Olympic Games winner Shakhobiddin Zoirov moved back to the flyweight (52kg) and started his campaign strongly against Turkmenistan’s Yhlas Gylychjanov. His teammate Elnur Abduraimov also returned to the world of boxing from the professional bouts and did not give any chance to Algeria’s Olympian boxer and All Africa Games winner Reda Benbaziz at the lightweight (63kg).
Chinese Taipei’s Tu Po Wei is member of the international events since 2013 but his success over Israel’s experienced David Alaverdian was also a small surprise in the fourth day of boxing. The 22-year-old Tu moved up to the flyweight (52kg) and eliminated his Israeli rival who won one contest in the Hamburg 2017 AIBA World Boxing Championships and defeated top athletes during his career.
Kazakhstan’s two-time ASBC Asian Boxing Championships silver medallist Zakir Safiullin combined his technique with attacking style and defeated Azerbaijan’s Bakhtiyar Gazibayov in a key contest at the lightweight (63kg). An Asian battle was also held in this category which was won by India’s Commonwealth Games silver medallist Manish Kaushik who bowed out Kyrgyzstan’s Argen Kadyrbek Uulu.
Thailand’s Somchay Wongsuwan claimed silver medal in the Thailand Open International Boxing Tournament and had to do his very best against Iran’s tall Moslem Maghsoudi. The Iranian attacked well in the bout and did not use his long distance well while Wongsuwan’s punches arrived in time. The Thai boxer celebrated his 23rd birthday on the day of the fight and advanced to the next stage.
Tajikistan’s defending ASBC Asian Champion Bakhodur Usmonov was almost untouchable for Ukraine’s Oleksandr Zhelezniak and also advanced to the next preliminary round of the lightweight (63kg). The further winners of this category were South Korea’s Kang Hyeon Bin, Japan’s Rio 2016 Olympian Daisuke Narimatsu and China’s Shan Jun who defeated Palestine’s Ahmed Harara.