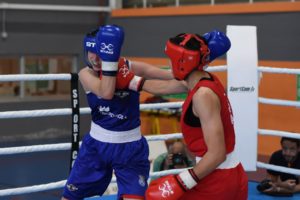 The prestigious Boxam Tournament for the elite female and male boxers started in Castellon de la Plana, Spain where Thailand is attending with their bests. Their ASBC Asian Confederation Boxing Championships silver medallist Nilawan Techasuep opened her campaign in the Boxam with a strong success.
Thailand hosted the last edition of the ASBC Asian Confederation Boxing Championships in Bangkok on April. Their management sent 10 boxers including three female athletes to the new edition of the Boxam Tournament. The Boxam Tournament is part of their European tour to raise the experiences of their hopes.
Thailand’s ASBC Asian Confederation Women’s Boxing Championships runner-up and Asian Games bronze medallist Nilawan Techasuep was the favourite against Spain’s Maria del Carmen Madueno in her first contest in the Boxam Tournament in Castellon de la Plana. The Thai featherweight (57kg) boxer was taller than her Spanish opponent and used that distance well enough from the first seconds. Techasuep was not only smarter than his European rival but the referee had to count Madueno in the third round. The final verdict was unanimous decision to Techasuep who advanced to the last eight in the Boxam Tournament.