Tajikistan vs. Kyrgyzstan 2-1 on Day1 following the amazing Opening Ceremony in Fujairah 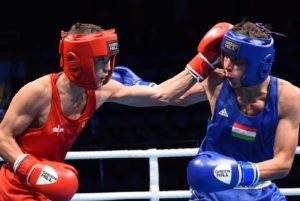 The Opening Ceremony of the ASBC Asian Confederation Junior Boxing Championships in Fujairah amazed the crowd with its laser show and special elements. Following the fantastic Opening, the first session of the competition was held in Fujairah where Tajikistan defeated Kyrgyzstan 2-1 on Day1.

The President of the Asian Boxing Confederation Mr. Anas Alotaiba underlined the event is holding for both genders in his Opening Speech. The number of the countries is record number of 26 in the ASBC Asian Confederation Junior Boxing Championships in Fujairah where record breaking 239 athletes altogether including 170 male and 69 female are attending in the United Arab Emirates.

India’s Bishwamitra Chongtham won the first fight of the whole event by RSC
India’s Bishwamitra Chongtham reached strong international results this year among the junior boxers and started her first fight aggressively in Fujairah. His light flyweight (48kg) opponent was Iraq’s Mohamed Baqer Radhi Al-Shuwaili who moved back to avoid the Indian attacks but Chongtham was quicker than his inexperienced rival. The Indian southpaw increased his tempo in the third round and the referee had to count the Iraqi boxer in that period following Chongtham’s tough punches. After the second count the referee stopped their bout and India’s pride won the first bout of the whole ASBC Asian Junior Boxing Championships.

Tajikistan’s 14-year-old Abubakr Murodov won his opening bout on Day1
Tajikistan’s youngest team member is Abubakr Murodov who will be turning to 15 only in the end of the year but he started bravely in his debuting contest in Fujairah. The Kulob-based Tajik boxer used his footwork to keep the best fighting distance in the first round against Kyrgyzstan’s Adilet Omurov who competed more events than Murodov in the recent years. The Tajik talent moved closer in the second and his hooks worked well enough to beat his older Kyrgyz rival in Fujairah.

Uzbekistan’s newcomer Gofurjon Tokhirov showed his strong technical skills
Uzbekistan sent a strong team to the ASBC Asian Junior Boxing Championships to Fujairah where their light bantamweight (52kg) boxer is Gofurjon Tokhirov who replaced Ilkhom Kakhorov in the final minute. Tokhirov proved his very best in his opening contest against Malaysia’s Joel Evekly Jain who has just moved up to this division. Tokhirov, who trains in the city of Chinaz in the Tashkent region, try to follow his boxing icon, Julio Cesar La Cruz’s footwork in the bout and he proved better technique than the Malaysian today.

China’s first success was achieved by Zhao Xianran
Tajikistan’s Bakhtovar Daliev was involved to the national team only a few months ago following his strong national performances. The Tursunzoda-based light welterweight (63kg) boxer impressed in the first round against China’s Junior National Games winner Zhao Xianran. Daliev tried to use his longer reach in the bout but Zhao increased his tempo in time to turn back their fight in Fujairah. The Chinese boxer started his career five years ago and had enough experiences in the sport to start with a success.

Kyrgyzstan’s first victory was taken by 15-year-old Argen Baktybekov
Kyrgyzstan’s juniors had to meet with Tajikistan three-times in the opening day of the ASBC Asian Junior Boxing Championships in Fujairah. Tajikistan’s Abubakr Yunusov was taller than his Kyrgyz opponent Argen Baktybekov in the first bout of the heaviest category but his neighbouring rival was technically better. The 15-year-old Kyrgyz heavyweight (+80kg) boxer used a pressurizing tactic following his compatriot’s losses on Day1 and his excellent motivation delivered a success for Baktybekov.