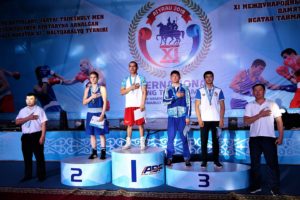 The 11th edition of the Issatai Taimanov & Makhambet Utemisov Memorial Tournament for the elite men boxers was held in Atyrau, Kazakhstan which is a prestigious competition in our continent and launched in 2009. The level of the new edition was higher than in 2018 and such stars as Tajikistan’s Bakhodur Usmonov and Kazakhstan’s duo as Ablaikhan Zhussupov and Abilkhan Amankul also won gold medals in Atyrau.
Issatai Taimanov and Makhambet Utemisov were Kazakhstan’s heroes who lived in the 18th and 19th centuries and not only served their country as warriors but poets as well. The competition will be held in Atyrau which is located off the coast of the Caspian Sea and the traditional venue of the Issatai Taimanov & Makhambet Utemisov Memorial Tournament.
The city of Atyrau hosted several international competitions besides to the Issatai Taimanov and Makhambet Utemisov Memorial Tournament in the recent years to raise the region’s boxing life including with the Askar Kulibayev Prizes Tournament and the Moldagulova & Dospanova & Mametova Women’s Memorial Tournament.
Sadaiy Farzaliyev lives and trains in the Atyrau region and following his international experiences mainly from the Ulaanbaatar Box Cup he managed to win his final against Mangystau region’s Dinmukhamed Ibragimov at the light flyweight (49kg). The second title of the competition was taken by Kazakhstan’s experienced Olzhas Bayniyazov who had a successful final against Kuanysh Duisenbay keeping the next gold medal in Atyrau.
ASBC Asian Confederation Youth Boxing Championships bronze medallist Aydos Arapov will be turning 21 this year and he had tough performance in the final of the bantamweight (56kg) against his teammate Bekzat Magzhan in Atyrau. Rustam Rustamov has been attending in the international events since 2011 but he had to do his very best to beat Bakhtiyar Smagulov in the final of the lightweight (60kg).
Tajikistan’s Bakhodur Usmonov is the defending ASBC Asian Champion at the light welterweight (64kg) who continued his campaign to the upcoming AIBA World Boxing Championships in Atyrau successfully. The 21-year-old Tajik light welterweight (64kg) boxer had to meet in the final with Kazakhstan’s WSB Team Champion Dilmurat Mizhitov which was a sensational fight in the event. Usmonov used his counter-attacking style to land punches and his concentration was enough to win this difficult final in Atyrau.
Kazakhstan’s former Youth Olympic Games winner and AIBA World Boxing Championships bronze medallist Ablaikhan Zhussupov returned to the ring after a few months and he enjoyed his final at the welterweight (69kg) beating Dulat Bekbaulov by unanimous decision. Atyrau region’s Nurkanat Rays won the title of the middleweight (75kg) following his success over Kyrgyzstan’s Zharkynbek Turatov while Tajikistan’s Bakhtiyor Mirzomukhammad achieved only bronze in Atyrau.
Kazakhstan’s Abilkhan Amankul achieved silver medal in the Hamburg 2017 AIBA World Boxing Championships and bronze in the Tashkent 2017 ASBC Asian Confederation Boxing Championships. The 22-year-old star has also a fantastic record in the World Series of Boxing who returned to the competitions following his shoulder injury. Amankul recovered successfully and opened his campaign at the light heavyweight (81kg) beating Kyrgyzstan’s Rio 2016 Olympian Erkin Adylbek Uulu in the final.
Turkestan region’s Abzal Kuttybekov is in promising stage and the heavyweight (91kg) boxer proved that he has all the skills to beat his local rivals including Artem Pchelyakov in the final. A 21-year-old super heavyweight (+91kg) boxer Nurlan Saparbay also determined his tough development in the Taimanov & Utemisov Memorial Tournament where he walked over to the gold against FISU University World Champion Nursultan Amanzholov.

List of the winners in the Taimanov & Utemisov Memorial Tournament