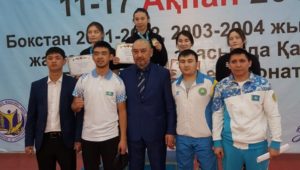 Kazakhstan Boxing Federation’s next national event in 2019 was held for the women’s youth & junior boxers where 25 champions have been crowned. Among Kazakhstan’s best youth hopes Anel Kudaybergen, Anel Sakysh, Moldir Toikova, Mariya Gladkova, Milana Rudenko and Gulsaya Yerzhan all won their gold medals in the event.
The 2001-2002 born boxers were able to attend in the youth part of the event and the athletes could fight in 11 weight classes. The younger 2003-2004 born boxers fought for the 14 available gold medals in the junior part of the National Championships.
The younger age group has been preparing to the upcoming ASBC Asian Junior Boxing Championships which will be held in Fujairah, UAE in October and the girls have been added to the event at the very first time. The older boxers are focusing also to a big event to the ASBC Asian Youth Boxing Championships which will be taking place in Ulaanbaatar, Mongolia this November 8-18.
Kazakhstan produced superb performance in the women’s youth events in 2018 claiming titles in all of the big tournaments while their juniors claimed also several gold medals in smaller international tournaments. Their new generation of youth boxers impressed once again following their superb international results this year.
The first gold medal of the junior event was captured by Khava Balkoyeva of Pavlodar who defeated Ulpan Nurmash of Taraz in the final of the 44kg weight class. The junior pinweight (46kg) was a crowded category with the participation of 20 boxers and the gold was finally claimed by Symbat Aliaskar of Taraz.
Shymkent’s Elina Bazarova had a narrow semi-final against Almaty’s Shakhnaz Isayeva but following that success, he stopped her final opponent Aruzhan Kabylkhanova quickly at the light flyweight (48kg). Gulnar Turapbay won the next title at the junior flyweight (50kg) which was also a popular one with the participation of 20 girls.
Ayshagul Yelubayeva delivered one of the KO successes in the junior part of the National Championships and won the title at the light bantamweight (52kg). Nazerke Serik of Taraz arrived from a boxing family to the event and dominated the bantamweight (54kg) including her final against Araylym Zhiyenbayeva. In the heavier junior categories Zhulduz Shayakhmetova (60kg), Anar Tursynbek (63kg), Zhibek Zharaskyzy (66kg), Dana Diday (75kg) and Kseniya Dreval (+80kg) controlled all of their contests.
Almaty Region’s Anel Kudaybergen impressed in the Budapest 2018 AIBA Women’s Youth World Boxing Championships where she claimed bronze medal therefore her success over Mariya Kudinkina in the final of the youth light flyweight (48kg) was not a surprise. Almaty’s Anel Sakysh is spending her first year among the youth boxers but she shined in the final of the flyweight (51kg) against Araylym Marat.
Almaty’s next success was taken by an experienced international level boxer Moldir Toikova who had a tough final fight at the bantamweight (54kg) but she managed to win her gold against Karina Ayzakhmetova. One of the most anticipated fights were held between Mariya Gladkova and ASBC Asian Women’s Youth Boxing Championships silver medallist Yerkezhan Dauletzhankyzy in the final of the featherweight (57kg). Almaty’s Gladkova moved down one category but she was quicker this time than her big rival.
Almaty region’s Ulzhanay Mamutova dominated all of her fights during her road to the final of the lightweight (60kg) which she won by walk over. The light welterweight (64kg) title was won by Balzhan Askar of Taraz who had a surprise success over ASBC Asian Women’s Youth Boxing Championships silver medallist Maiya Beisebayeva in the final delivering a major upset in the Nationals.
Milana Rudenko is a native talent in our sport who has not got enough international bouts yet but she won all of her three contests at the middleweight (75kg). Gulsaya Yerzhan has got international experiences from several events but she had to do her very best to beat Almaty’s Golden Girl Box Cup winner Eldana Talipova in the final of the light heavyweight (81kg).