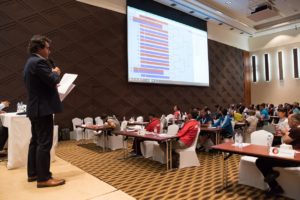 Following the Technical Meeting the Official Draw was held in the ASBC Asian Confederation Junior Boxing Championships in Fujairah at the Novotel Hotel. The Technical Delegate of the ASBC Asian Confederation Junior Boxing Championships Mr. Pat Fiacco led the Official Draw as well.
The number of the countries is record number of 26 in the ASBC Asian Confederation Junior Boxing Championships which is the first ever competition for the female juniors in our continent. The number of the boxers are also record breaking 239 altogether including 170 male and 69 female.
The top boxing nations as Kazakhstan and India arrived with maximum number of 26 boxers to the ASBC Asian Junior Boxing Championships. Uzbekistan arrived with 23 boxers to this competition among the stars of our continent. From the developing Asian countries Afghanistan, Bahrain, Bhutan, Iraq, Nepal, Palestine, and Sri Lanka also sent boxers to the event to Fujairah.
Kazakhstan’s Nurkhan Zhylkybay and Philippines’ Eljay Pamisa are top boxers at the men’s pinweight (46kg) but they will be meeting already in the last 16. At the very first time in the history of the ASBC Asian Junior Boxing Championships there are more than 16 boxers in a weight class. At the light flyweight (48kg) there are 17 participants and the first key bout will be held between Uzbekistan’s Heydar Aliyev Junior Cup winner Asrorbek Shakhobiddinov and Mongolia’s Baigali Bayan-Erdene.
Uzbekistan’s Anvar Boltaboyev is a 15-year-old talent but he has already strong experiences in the junior age group who will be facing as first with Philippines’ Jericho Acaylar at the flyweight (50kg). An impressive top preliminary bout will be held between Uzbekistan’s Bilolbek Ikhvolov and India’s Rabichandra Singh Laishangbam at the featherweight (57kg).
Kazakhstan’s Adilzhan Zhandarbek are Kyrgyzstan’s Sagyn Satybaldy Uulu are both gold medal contenders at the light welterweight (63kg) but the two great hopes will be facing already in the first round. Japan’s experienced Ryoma Yamamoto is a top future hope who will be meeting with Kazakhstan’s Rakhymzhan Shanzharkhan at the light middleweight (70kg) as first which bout will be guaranteed a superb contest.
Kyrgyzstan’s Suleimenov Prizes Junior Tournament winner Khalit Aliev is a favourite for the gold but his opening rival will be Uzbekistan’s Abdulla Almamatov at the light heavyweight (80kg). Uzbekistan’s 196cm tall amazing talent Jakhongir Zokirov and India’s Vishal Gupta will be guaranteed a top fight at the heavyweight (+80kg).
India arrived with powerful woman team and their Tamanna and Chinese Taipei’s Liu Yu Shan will be meeting in a superb fight at the women’s light flyweight (48kg). China’s Junior National Games winner Liu Yuhang will be boxing with Uzbekistan’s Anorakhon Melieva at the quarter-finals of the welterweight (66kg) which bout could be also a remarkable one.