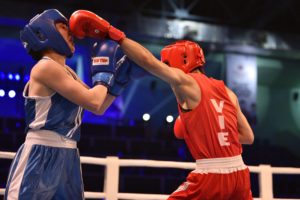 The third competition day was held with 46 preliminary bouts in the Guwahati 2017 AIBA Women’s Youth World Boxing Championships today. Asia won 13 contests in the recent two days and our continent’s talents raised this figure up to 32 on Day3. India, China and Kazakhstan were the bests among the Asian countries today.
The total number of the boxers is 160 from 31 nations and among them 67 Asian competitors will be attending for the medals in Guwahati from 14 countries from our continent. China, Chinese Taipei, India, Japan, Kazakhstan, South Korea, Mongolia, Nepal, Philippines, Sri Lanka, Thailand, Tajikistan, Uzbekistan and Vietnam are the participating Asian nations in Guwahati.

Light flyweight (48kg):
India’s Nitu defeated Bulgaria’s two-time EUBC European Youth Champion Emi-Mari Todorova in the Balkan Women’s Youth Tournament in October. Nitu, who received the right to box in Guwahati only in the final minute, had difficulties in the first round in their re-match in the global event. The 17-year-old Indian was more aggressive from the second round and she was able to beat Europe’s star boxer in Guwahati.
China’s three-time National Champion in various age groups Nie Yuan arrived to Guwahati as one of the gold medal contender of the light flyweight (48kg). The 18-year-old Chinese boxer, who trains in the city of Hebei, controlled all of the rounds against Scotland’s Billie Denholm in her debuting contest but her next rival was more competitive, Mongolia’s Mungunsaran Balsan. Nie Yuan had excellent defence in their contest and her performance was enough to beat her Mongolian rival in Guwahati.
Zhazira Urakbayeva is one of the best boxer in the Kazakh youth national team who demonstrated her fantastic technique in Guwahati. The AIBA Women’s Junior World Boxing Championships bronze medallist Kazakh talent was too strong for Sri Lanka’s Henayale Gedara Madumali Eranga Priyadarshani. Urakbayeva joined to the last eight as third Asian boxer in the lowest weight class.

Flyweight (51kg):
Kazakhstan’s Zhansaya Abdraimova is a native talent in our sport who began boxing only two years ago but her improvement is amazing. She won the Bekzat Sattarkhanov Women’s Youth Tournament and the Slovakian Cup this year and the Taraz-based Kazakh talent already eliminated France’s Golden Girl Box Cup winner Johanna Wonyou in the first preliminary round. Abdraimova had height disadvantage in her second contest against Australia’s Indianna Heibloem but she moved forward and caught her Aussie opponent well. The referee counted Heibloem in the second round therefore Abdraimova advanced to the quarter-finals where she will be meeting with US star Heaven Garcia.
India’s Jyoti Singh moved up to the flyweight (51kg) only in the recent months but she was selected to represent her country in Guwahati. The Indian talent, who will be turning to 17 only in December, tried to reduce the fighting distance against Ukraine’s EUBC European Confederation Women’s Youth Boxing Championships silver medallist Anastasia Lisinska. Jyoti moved ahead without any stoppage against the taller Ukrainian and she could celebrate her victory after the final bell.
Mongolia’s Children of Asia Games winner Khongorzul Delgerkhangai is only 17 but she proved top performance in her debuting contest in Guwahati against such strong rival as Bulgaria’s Goryana Stoeva who is the defending EUBC European Women’s Youth Champion at the flyweight (51kg). Delgerkhangai had to meet with Japan’s Rinka Kinoshita in the last 16 but she was not able to repeat that same strong performance and lost to her inexperienced rival in the third competition day.
Tajikistan’s flyweight (51kg) No.1 Madina Gaforova, who claimed bronze medal in the Umakhanov Women’s Tournament, eliminated China’s Wang Yan with great performance on Day1 which was a surprise in Guwahati. The 18-year-old Tajik girl met with Chinese Taipei’s youth No.1 Chen Tzu Hsuan in the next round and their contest delivered a spectacular fight. The final verdict was split decision to Chinese Taipei’s Chen who remained her chance to get at least a medal in the competition.

Bantamweight (54kg):
Mongolia’s AIBA Women’s Junior World Boxing Championships bronze medallist Enkhjargal Munguntsetseg had to meet with Japan’s Youth National Champion 17-year-old Sena Irie in a classical Asian battle on Day3. The Mongolian boxer found the whole on Irie’s defence in the first round but her Japanese opponent did not give up their fight. The Japanese talent had great stamina in the second part of their contest and the judges picked her as the winner of the bout.
China’s Youth National Champion Lu Xia had to meet in her first bout with Chinese Taipei’s Lin Chao Ling who began boxing in 2012 and won five national events during her career. Chinese Taipei’s 18-year-old hopeful, who boxed at the 2015 AIBA Junior World Boxing Championships, ruled the middle of the ring and tried to overcome her opponent’s attacks with good rhythm in the bout. The Chinese boxer caught Lin in the second round and her knock down was the difference between them.
India’s AIBA Women’s Junior World Champion Sakshi Choudhary was amazing in her preparation events before Guwahati and arrived to the city as one of the best hope of the host country. The 17-year-old Indian had to meet with Russia’s two-time European Champion Indira Shudabaeva as first which was an early final in this weight class. The Indian did much better second round and her strong performance was enough to beat one of her main rival in the AIBA Women’s Youth World Boxing Championships.
Kazakhstan’s Slovakian Women’s Youth Cup winner Laura Yessenkeldi arrived from Shymkent to Guwahati and she was dreaming about a medal before the start of the event. The 17-year-old Kazakh talent is near to her target after her dominating performance against Australia’s Ruby Brunker which means she needs only one further step to get a medal.

Featherweight (57kg):
China’s Hu Cailing was only quarter-finalist in their Junior Women’s National Championships in 2015 but since then she won her national events. The Chinese talent tried to use her height advantage against Tajikistan’s Madinai Abdulkholikzoda whose coach was London 2012 Olympic Games bronze medallist Mavzuna Chorieva in the corner. The Chinese boxer felt the rhythm well enough from the start until the end of the third round and advanced to the next stage of the event.
Vietnam’s ASEAN Youth Champion Do Hong Ngoc won all of her contests this year and arrived as a secret medal contender to Guwahati. Vietnam’s lone boxer in the AIBA Women’s Youth World Boxing Championships was excellent in the first round against Turkey’s Havanur En and proved she is a top talent in her weight class. Do Hong Ngoc won all of the rounds and joined to the quarter-finals in Guwahati.
Mongolia’s best youth boxer Namuun Monkhor is unbeaten in the national events in the recent years and opened her campaign in Guwahati against France’s Victoire Piteau which was a close success for her. The 18-year-old Mongolian No.1, who is a secret favourite in Guwahati, proved better performance against Ireland’s Labhaoise Clarke today. The referee counted her Irish opponent in the third round and Monkhor’s strong punches meant the Mongolian can continues in the quarter-finals.
Kazakhstan’s Sandugash Abilkhan claimed medals in all of her international events in 2016 and in 2017 therefore she was the favourite against Australia’s Madison Holland in her debuting contest in Guwahati. The 18-year-old Kazakh boxer, who trains with coach Rustam Zhumatayev, used the better technique in the bout against the attacking Australian. Abilkhan did enough in their three rounds to join to the last eight in Guwahati which means she needs only one further step to get a medal.
India’s Balkan Women’s Youth Tournament winner Shashi Chopra delivered another sensation performance in Guwahati where she is gold medal contender of her respective weight class. The 18-year-old Hisar-based boxer eliminated Uzbekistan’s two-time Youth National Champion Durdonakhon Rakhmatova and continued her strong performance against Chinese Taipei’s Lin Li Wei Yi. The Hungarian referee counted Lin in the first round after Chopra’s big punches and the Indian continued her dominancy until the final bell.

Lightweight (60kg):
South Korea’s Im Ae Ji was amazing in the first round when she eliminated India’s Golden Gloves of Vojvodina Women’s Youth Tournament winner Vanlalhariatpuii. The 18-year-old Korean talent, who won five national events in the recent two years, started aggressively in her second contest against Bulgaria’s Aslahan Mehmedova. Im is a new sensation in Asia’s women boxing life, she was quicker than her Bulgarian opponent and her accurate punches delivered for her a place in the last eight.

Kazakhstan’s Zhansaya Baltabekova began boxing in 2011 and following her title in the Slovakian Women’s Youth Cup she is hoping to get a medal in Guwahati. The Kazakh boxer eliminated Japan’s Seira Hamaguchi in the first preliminary round and after her first success she was able to control her second contest against Turkey Zeynep Gedikli.

Light welterweight (64kg):
India’s Ankushita Boro lives and trains in Assam region therefore she knows well the environment in Guwahati. The 17-year-old boxer, who achieved silver in the Ahmet Comert Youth Tournament and also in the Balkan Women’s Youth Tournament, had to meet with a top European rival, Turkey’s Cagla Aluc. Boro lost to her Turkish opponent in September but this time she used better tactic and her motivation was amazing in the front of the home crowd. The final verdict was unanimous decision to Boro who did revenge due her previous loss to the Turkish boxer.

Serik Konakbayev: We could create the united sport spirit of the Asian boxing