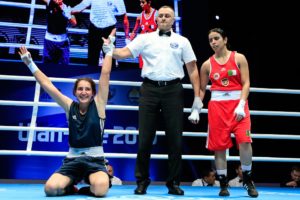 The Asian girls have done another impressive day at the AIBA Women’s World Boxing Championships in Ulan-Ude, Russia where the winners are advanced to the quarter-finals. India’s 20-year-old Manju Rani proved she is a gold medal contender at the light flyweight (48kg) while the most emotional Asian successes was delivered by Tajikistan’s Nilufar Boboyorova on Day5.

Seed No.1 DPR Korea’s Kim Hyang Mi bowed out a Japanese youngster at the light flyweight (48kg)
DPR Korea’s Kim Hyang Mi is the Seed No.1 at the light flyweight (48kg) who claimed several medals in the recent big events and arrived to Ulan-Ude as a gold medal contender. The North Korean boxer achieved bronze in the New Delhi 2018 AIBA Women’s World Boxing Championships therefore her target is a brighter podium place. Kim had to face with an Asian opponent, Japan’s 21-year-old Risa Nakata and she used her experiences to eliminate the younger talent on Day5.

India’s Manju Rani impressed with world class boxing at the light flyweight (48kg)
India’s boxing icon Chungneijang Mary Kom Hmangte moved up to the flyweight (51kg) therefore the new team member Manju Rani can attend in her first ever AIBA event. The 20-year-old Indian achieved strong international results in 2019 and arrived to Ulan-Ude as a medal contender. Rani had to meet with Venezuela’s more experienced Tayonis Cedeno but she maintained the best fighting distance quickly in the first minute. The young Indian was confident in the bout and won her preliminary match by large margin of differences.

Thailand’s six-in-a-row success was achieved by Chuthamat Raksat at the light flyweight (48kg)
Thailand’s female team impressed in the first preliminary round of the AIBA Women’s World Boxing Championships, all of their attending five boxers won their debuting contests in Ulan-Ude. Jeju 2014 AIBA Women’s World Boxing Championships bronze medallist Chuthamat Raksat won her first contest with tough performance but her second rival was much stronger. The 26-year-old Thai, who moved back to her original light flyweight (48kg), and her veteran opponent Chinese Taipei’s Pin Meng Chieh both amazed in the first round with their high number of combinations. Raksat was slightly better in the second part of their world class bout and advanced to the quarter-finals in Ulan-Ude.

Tajikistan’s Nilufar Boboyorova celebrated her first success in Ulan-Ude
Tajikistan’s best female boxers as Shoira Zulkaynarova and Idimokh Kholova have been eliminated by stars in the previous stages of the AIBA Women’s World Boxing Championships. Nilufar Boboyorova received the right as first to attend in the ASBC Asian Women’s Boxing Championships in Bangkok this April. The young Tajik girl had to face with Algeria’s Chahira Selmouni who is more experienced than the Central Asian. Boboyorova boxed over her previous level and eliminated the North African winning the light welterweight (64kg) bout by split decision.

Kazakhstan’s Milana Safronova advanced to the last 8
Fariza Sholtay and Rimma Volosenko made perfect day for Kazakhstan in the fourth day of boxing in Ulan-Ude and their next boxer continued that winning series in the AIBA Women’s World Boxing Championships. Milana Safronova fought out her place in the national team at the light welterweight (64kg) one year ago and she selected to attend in her second world event. The Kazakh boxer controlled the first two rounds against Botswana’s tall Aratwa Kasemang who moved up one category since the All Africa Games. Safronova won their contest by unanimous decision and following Boboyorova, she also joined to the last eight.