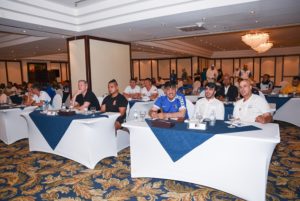 Following the Technical Meeting the official draw was held in the ASBC Asian Confederation Schoolboys Boxing Championships in Kuwait City. The Technical Delegate of the ASBC Asian Confederation Schoolboys Boxing Championships Mrs. Karina Picson of Philippines led also the Official Draw after the Technical Meeting.
Number of the countries is 21 at the ASBC Asian Confederation Schoolboys Boxing Championships. 150 talented 13 and 14-year-old boxers will be attending in the event in 14 weight classes in Kuwait City.
India, Kazakhstan, Kyrgyzstan and Uzbekistan sent maximum number of 14 boxers to the ASBC Asian Confederation Schoolboys Boxing Championships. Jordan arrived with impressive 12 boxers to Kuwait City which shows their high potential in the event and the development of their grassroots. From the developing Asian countries Afghanistan, Bahrain, Nepal, Pakistan, Palestine, Saudi Arabia and Sri Lanka also sent boxers to the event.
Uzbekistan’s Zirve Children Games winner Farrukh Tulaganov is only 13 but he is one of the main favourites at the 40kg where he will be meeting with a dangerous opponent Kyrgyzstan’s Abdulaziz Burkushev as first. India’s experienced Rupesh Bind will be boxing for the last 16 in a key preliminary contest against Thailand’s Kalaseeram Thanaphansakon at the 43kg division.
Philippines’ most experienced boxer Reymond Lofranco has nearly 100 bouts already who will be meeting in the first round of the 46kg with Mohammed Hussein Jasim. The preliminary bout between Kazakhstan’s Sultan Moldash and Kyrgyzstan’s Islam Imanidinov could be the highlight at the 49kg weight class.
Kyrgyzstan’s two-time Schoolboys National Champion Vadim Baurin will be boxing with Jordan’s Ibrahim Faris Ahmad at the 55kg. Turkmenistan’s Magomed Kseyhanov is son of their coach Sabyr who will be meeting for the last eight with India’s most experienced team member Yashwardhan Singh at the 58kg division. At the 61kg weight class nine boxers entered and in the important quarter-finals will be held between Kazakhstan’s Viktor Litvinov and India’s Sunil Negi in Kuwait City.