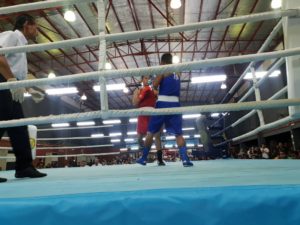 The third competition day was held in the new edition of the Penang Trade Fair International Tournament or shortly known as Penang Pesta in Malaysia. Muhamad Firdaus Bin Kamarulzaman delivered the first KO success of the competition and advanced to the last four of the light welterweight (64kg).
The competition period of the Penang Trade Fair International Tournament is between December 27 and 31 and the event is recognized for men’s elite and men’s youth boxers. Twelve elite and eight youth contests were held in the third competition day of the Penang Trade Fair International Tournament where the youth winners advanced to the finals.
The following weight classes are scheduled in the men’s youth part of the Penang Pesta Tournament: 49kg, 52kg, 56kg, 60kg, 64kg, 69kg and 75kg. The men’s elite boxers are attending in the event in nine different weight classes: 49kg, 52kg, 56kg, 60kg, 64kg, 69kg, 75kg, 81kg and 91kg.
Malaysia’s top youth talent Muhammad Rasdenal Haikal, who was quarter-finalist at the Bangkok 2018 ASBC Asian Confederation Youth Boxing Championships this April, eliminated Paramesivam Ilango in his debuting contest at the light flyweight (49kg) on Day2. Following that success, he continued his winning path against Pahang’s Ismail Bin Razuhat and will be meeting for the title with Muhammad Abdul Qayyum Ariffin.
Another Penang-based youth talent Sheik Rahmatullah Ibrahim amazed the crowd on Day3 when he bowed out of his way Thailand’s experienced Patipat Phetkhum and marched to the final of the flyweight (52kg). The 17-year-old Malaysian talent will be facing for the gold medal of this youth category with Jackson Chambai Anak Ikeh.
Malaysia’s national team member Arfiqanie Ahmad Bin Anshori spent only less than two rounds in the ring when he faced with Muhammad Aimaani Bin Wahid in the quarter-final of the lightweight (60kg). The 22-year-old Malaysian, who is member of the national squad since 2015, won his first bout by RSC and advanced to the semi-finals in Penang.
Myanmar’s Kyaw Min Oo started well in the first round against Mohamad Razki Bin Zulkifli and raised his tempo from the second therefore the judges picked him as winner of this quarter-final bout at the light welterweight (64kg). Muhamad Firdaus Bin Kamarulzaman dominated his fight in this category and knocked out Penang’s Hidayat Bin Abu Hassan in the first round delivering a classical KO victory.
Malaysia’s Mohamad Aswan Bin Che Azmi was not the favourite against Myanmar’s Myo Kyaw Thu but he exceeded all of the previous expectations with his strong performance in Penang. The local talent won their difficult contest by split decision and advanced to the semi-finals of the welterweight (69kg). Army boxer Muhamad Fitri Bin Musa won his quarter-final by RSC and also joined to the last four in Penang.